The Yemeni Teachers Syndicate said that the number of educators who died under torture in the prisons of the Houthi militia between September 21, 2014, and November 2020, reached 22 cases, describing what is happening in those prisons as “the most terrorist in the world.”

The media official of the Syndicate, Yahya Al-Yinai, stated that the class of teachers ranks first among the groups targeted for torture to death by the Houthi militants, with 16% of the total number of deaths under torture in Yemen amounting to 137 cases.

He pointed out that the first victim of torture to death in Yemen after the Houthi coup was an educator, and he was the teacher “Saleh Al-Bishri”.

Al-Yainai pointed out, according to what was reported by the “Al-Masdar Online” website, that Hodeidah governorate first resolves the number of deaths by 4 teachers, followed by the governorates of Hajjah, Saada and Amran with three in each, then Sana’a, Dhamar and Amanat Al-Asimah by two deaths in each governorate.

The union official condemned the silence of the UN envoy to Yemen about these violations, and said: “While the Houthi prisons are the end of humanity, and his militias do not care about international humanitarian law, the UN envoy Griffiths is also indifferent to anything.”

He added: “What is really unfortunate is that these teachers are not on the list of concerns of the UN envoy, nor in his schedule and his frequent visits to Sanaa, despite what is happening in Houthi prisons is the most terrifying in the world.”

Al-Yinai called for the detained educators to be released immediately, to stop obstructing the access of lawyers and families to them, and to prosecute officials involved in torture at the local and foreign levels.

He said, “Torture is a crime against humanity, and that the Yemeni constitution not only prohibits torture, but rather goes beyond that to” prohibiting torture of all kinds, whether physical, psychological, or moral, and even forbidden what is the least of that, such as coercion to confess or inhuman treatment, whether upon arrest, detention or Imprisonment or investigation, and all of this is explicitly stated in Paragraph (b) of Article (47) of the Constitution.

It also stipulated that anyone who practices it, orders it, or participates in it must be punished in accordance with the provisions of Paragraph (e) of Article (47) of the Yemeni constitution, and that torture is a crime that is not subject to statute of limitations.

This morning, Friday, the Saudi Ministry of Defense announced the liberation of two American women after their freedom was restricted ... 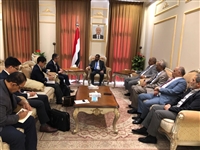 The Deputy Speaker of the House of Representatives, Engineer Mohsen Basura, affirmed the Yemeni legitimacy’s commitment to the UN truce, ...

The President of the Arab Parliament, Adel Al-Asoumi, welcomed the European-American statement condemning the terrorist attacks of the Houthi militia ...