The Gulf of Aden Media Corporation has issued a comprehensive report on the conditions in the temporary capital of Aden, which includes a number of economic, political, social and services axes and fields, with the most important changes that the city has witnessed during the past five years since the liberation of Aden and the rest of the southern governorates.

The report explained that during the period (2016-2020) Aden witnessed a great change that included its historical monuments and monuments, and also included the most prominent features that Aden has been characterized for decades, such as coexistence between its social and political components despite the religious, sectarian and sectarian differences and differences, and the diversity of the ethnic origins of the city’s people. Pointing out that the bulldozing appeared as an intentional and deliberate act in targeting Aden, and its hands and tools extended to the air ports (Aden International Airport) and the navy from ports, coasts and a free zone, as well as tightening control over land ports and entrances, and reflected on the reality of Aden in daily practices that had negative effects on Calculation of the city and its people.

The report sheds light in its first axis on the manifestations, effects and repercussions of the razing, foremost among which are the razing of the indigenous population and the creation of new population blocks, the razing of rights and the looting of housing and public and private properties, the razing of historical monuments, the plunder of lands and the distortion of the aesthetic view of Aden, in addition to razing the right to life through assassinations, kidnappings and arrests against Religious scholars, community figures and leaders of the resistance, and the razing of civilian life represented by targeting civil society and pursuing activists and media professionals. The report also dealt with the bulldozing that the people of Aden were subjected to in government facilities for the benefit of expatriates supported by power, money and influence.

The second axis came under the title (Death Parades in Aden) and focused on the health sector in the year 2020, and the remarkable deterioration it witnessed in conjunction with the spread of the Corona pandemic and a number of diseases and epidemics following the damage caused by the torrential rains that Aden witnessed in April 2020, and the emergence of dozens The stagnant water swamps that provided a fertile environment for the spread of some diseases, and those conditions prompted the government to declare Aden a disaster city.

The report dealt with a number of facts, data and figures that reflect the difficulty of the situation and the collapse of basic services, especially after the emergence of the first cases of infection with the Corona epidemic, and the subsequent state of great confusion in the health sector, which led to the actual collapse coinciding with the doubling of the state of political and security turmoil after the announcement of the Transitional Council. Autonomy of Aden and other southern governorates.

The report devoted the third and last axis to the economic harvest of Aden 2020, in which it reviewed the features of the economic scene in light of the absence of the government role after armed confrontations with the forces of the Transitional Council at the end of 2019, and the latter’s control of state resources and then its seizure of more than 300 million dollars under the banner of “Autonomous Administration.” Which was announced by the council leadership in late April 2020.

The report sheds light on the conditions of Aden refineries and the stoppage that occurred due to the war and its repercussions, as well as the movement of Aden ports, which was at the top of the list of those affected by the Corona pandemic, through the decline in movement due to the pandemic, and the increase in shipping prices to the port of Aden to double what they were before the outbreak of the epidemic. . He explained that the situation has dramatically deteriorated, basic services have retreated, food prices have risen, and the price of the local currency has deteriorated against foreign currencies in the past year in an unprecedented manner.

The Gulf of Aden Media Foundation is a civic organization established in Aden in 2013, and is concerned with following up the local and regional scene in general and the media in particular, and monitors and covers the political, economic and social changes taking place in the Yemeni arena, as well as sheds light on the areas of human rights, public freedoms, democratic transformation and political pluralism.

The Citizen Rights Group, with the participation of tens of residents of the temporary capital, Aden, today morning, Wednesday, a ...

Colleague Haitham Al-Shehab, the journalist released from the prisons of the Houthi coup militia, narrated stories of the forms of ... 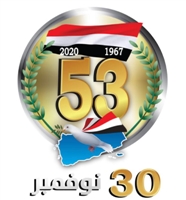 Yemenis commemorate the 53rd anniversary of the evacuation of the last British soldier from the south of the homeland, amid ...