Today, Sunday, the National Army forces backed by the popular resistance and the air force of the Coalition to Support Legitimacy broke several suicide attacks by the Iranian-backed Houthi coup militia, on the fronts in the west of the Marib Governorate.

The “Armed Forces Media Center” quoted a military source as saying that “the heroes of the army and the resistance broke the fiercest attacks launched by the Houthi militia in succession in an attempt to achieve any progress on the fronts of Hailan, Al-Mujahid and Al-Kassara, but it failed in the face of the vigilance and toughness of the heroes.”

The source stated, “The battles that lasted for hours resulted in the death of at least 70 members of the Houthi militia, as well as dozens of wounded and prisoners, while those who remained fled under the blows of heroes.”

He pointed out that the battles coincided with artillery shelling of the National Army forces, where 5 armored vehicles and 2 crews carrying reinforcements for the militia were destroyed on the Kassara and Hailan fronts.

The air forces of the Coalition to Support Legitimacy have targeted, with several raids, separate locations of the Houthi militia in Al-Mashjah, Hailan and Al-Kassara, causing great human and material losses among the militias.

Violent confrontations are taking place for the third week in a row on all fronts in the Ma’rib governorate, in which the Houthi terror militia suffered enormous losses and failed to make any progress.

The fifth day of the Ma’rib Book Fair witnessed the holding of two intellectual and literary events within the activities ... 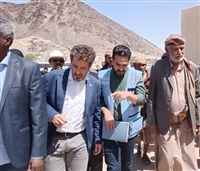 The Deputy Humanitarian Coordinator of the United Nations in Yemen, Diego Zorrilla, and his accompanying team, during their visit today ...

They spend most of their time with their parents in front of the “Al Masirah” channel, and over time they ...