Muammar Al-Eryani, Minister of Information, Culture and Tourism, condemned and denounced more severely The phrases: The Iranian Houthi militia targeted the Ali Abdul-Mughni Hospital in the Abdiya District, and a fuel station in the Juba District in the Marib Governorate, with two ballistic missiles. Iranian Made.

Al-Eryani added, “This criminal targeting of the only hospital in the district comes in light of a brutal siege imposed by the Houthi militia. led As a result of the depletion of its stock of medicines and medical supplies, the suspension of equipment due to the exhaustion of diesel and the complete power outage, its inability to provide services, and the inability to evacuate cases to other areas as a result of the siege.

Al-Eryani called on the international community, the United Nations, and the UN and American envoys to clearly condemn the crime of bombing the Houthi militia terrorist Ali Abdel-Mughni Hospital, as a full-fledged war crime, and the presentation of those responsible for it from the leaders and militia members to the International Criminal Court as “war criminals”.

SAM Organization for Rights and Freedoms said that the Houthi militia has dismissed about 8,000 Yemeni teachers from their workplaces ... 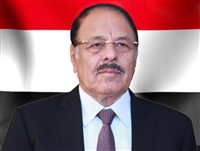 The Vice President of the Republic, Lieutenant-General Ali Mohsen Saleh, stressed the closeness of the ranks and the rallying around ...