Top Stories A human rights organization monitors 1,465 violations against media freedoms in Yemen since the start of the war

A human rights organization monitors 1,465 violations against media freedoms in Yemen since the start of the war

organization said rights radar Human Rights (based in Amsterdam/Netherlands), on Tuesday, said that it had monitored 1,465 violations of press and media freedoms in Yemen since the beginning of the war. In a statement on the occasion of the World Press Freedom Day, which falls on May 3 of each year, she explained that the violations varied between (murder, injury, arbitrary detention, enforced disappearance and torture, in addition to the partial or total destruction of institutions). Informative seizure of public and private property). She stated that the murder cases among media workers amounted to 76 cases, including 3 women, while the cases of injury reached 122 cases, including two cases of females. The organization documented: 573 cases of detention, including 554 males and 19 females, while the number of damages to public property reached 245, and private property amounted to 264 cases. The number of violations against the public and private media in Yemen reached 245 cases in 11 Yemeni governorates. These violations included satellite channels, radio stations, paper newspapers, electronic news sites, and governmental and private institutions. These violations varied between intrusion, control, looting, and destruction of equipment and vehicles affiliated with these means. The Houthi group was responsible for the first violation of press and media institutions by committing 211 incidents, followed by armed formations outside the authority of the state with 21 violations.

Iran’s Houthi militia continues to kidnap a number of journalists, four of whom have been kidnapped for seven years, and various types of psychological and physical torture are being practiced against them. 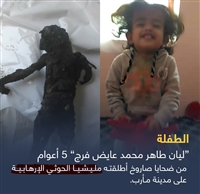 Today, 14 civilians, including a girl, were killed and 5 others were wounded, as a result of the targeting of ...

Besides, women in Yemen and children make up about 90‎ Of the more than four million internally displaced people, seven ...