Today, Saturday, at 4:00 pm, an electronic campaign will be launched on social media in support of Shabwa Governorate and its governor, Muhammad Saleh bin Adyo, under the hashtag #Shabwa_3_years_of_development

The campaign coincides with the passage of three years since Ben Adyo took over the administration of the governorate and what he has provided during these years since his appointment on November 26, 2018 AD as a wonderful model for development and renaissance in the governorate, which is making its way towards the future steadily in various developmental, economic and cultural fields.

The campaign organizers said that it aims to highlight the achievements that have been achieved during the past three years in terms of development and prosperity in Shabwa governorate, in addition to the security stability witnessed by the governorate, which has become a model for state presence, security, stability and a safe haven for many citizens from different governorates.

The campaign organizers called on all the people of Shabwa and Yemen in general to interact with this campaign and participate extensively in various media and media, as part of popular and societal efforts to praise the development that the governorate witnessed three years ago, stressing that what bin Adiyo is doing in Shabwa is a development revolution with all the meaning of the word. Meaning worthy of praise from every honest Yemeni as the least duty. 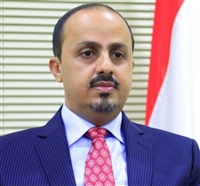 The Minister of Information, Culture and Tourism Muammar Al-Eryani said that the system Iranian He was not satisfied with smuggling ...

Welcome to the Yemeni Congregation for Reform, go off Operation Happy Freedom of Yemen, which was announced by the spokesman ...

The Minister of Information, Culture and Tourism Muammar Al-Eryani said, “The Houthi militia’s replacement of the term “Arabian Gulf” by ...