Top Stories Aden..a new crisis in oil derivatives and a wide spread of the black market

Aden..a new crisis in oil derivatives and a wide spread of the black market

Over the past two days, the temporary capital of Aden witnessed a new crisis in oil derivatives, after some gas stations closed their doors due to the lack of oil derivatives.

Local sources told Al-Sahwa Net that a number of private gas stations closed their doors starting yesterday, Thursday, while long queues were seen standing in front of some government stations for filling fuel.

The sources added that the oil derivatives crisis was accompanied by a wide spread of black markets in various areas of the city, where the price of a 20-liter canister of fuel reached 35,000 Yemeni riyals.

This crisis came after an official statement issued by the oil company on its Facebook page, monitored by the editor of “Al-Sahwa Net”, in which it confirmed that there was no change in the price of petroleum at the company’s government stations.

The company denied the circulating news about a rise in the price of petroleum, stressing that all its stations are operating at full capacity until ten o’clock every evening.

The company expressed its deep regret to the citizens due to the increase in the price of commercial oil, due to the rise in the value of the US dollar against the Yemeni riyal and the rise in global oil prices.

The company explained to citizens that the company’s stations are operating at their current prices without any increase, and that what some websites have circulated about the increase is not true.

In this context. The citizen, “Mohammed Sultan”, a bus driver, said that the oil derivatives crisis began on Thursday after a number of private gas stations closed their doors.

He added in an exclusive statement to “Al-Sahwa Net” that very few stations remained open, but the queues were very long in front of them and it took days to stop in order to obtain gasoline.

Muhammad Sultan indicated that some private stations reopened their doors, but they raised the price of oil derivatives in a crazy way, as the price of a 20-liter canister of fuel reached 35,000 Yemeni riyals at the same price as the black market.

He explained that the rise in fuel prices doubled their suffering, and also caused a rise in transportation prices, which will directly affect the citizen who suffers from the various crises experienced by the temporary capital, Aden.

From time to time, the temporary capital of Aden witnesses various crises, most notably in oil derivatives, in addition to the weakness of basic services in the city. 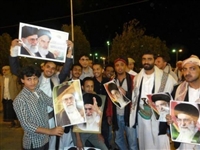 Shabwa Governor Muhammad bin Adyo met this afternoon in Ataq a number of local authorities, social figures and notables in ...

Minister of Information, Culture and Tourism Muammar Al-Iryani said, “The statements of the leaders of the Iranian-backed Houthi militia about ...