Top Stories After he was displaced from his home, the Houthi militia kidnapped the teacher al-Jaafari and prevented his children from entering exams

After he was displaced from his home, the Houthi militia kidnapped the teacher al-Jaafari and prevented his children from entering exams 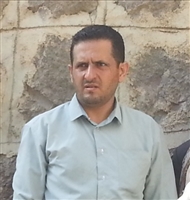 On Thursday, the Houthi coup militia kidnapped Professor Rashad Al-Jaafari from his home in the Al-Raha area of ​​Hazm Al-Adeen District, Ibb Governorate, and transferred him to one of its prisons.

The family of the kidnapped al-Jaafari confirmed that Houthi crews raided the house in a horrific way and took the educational Rashad on board one of the crews.

The Al-Jaafari family explained that the Houthis’ response to the family’s question about the reason for the kidnapping was that Professor Al-Jaafari published recorded videos calling for human rights organizations to show solidarity with him, and to condemn the crime of displacing him with his family from the house two months ago.

The family added that the Houthi leader, Jamal Al-Hamiri, directed Muhammad Al-Ghazali, appointed by the Houthis as director of the Education Office in the governorate, to prevent the children of Al-Jaafari, Rida, Abdul Rahman, and his brother-in-law from entering the exams.

And in the middle of last March, the so-called Jamal Al-Hamiri, appointed with the Houthi coup militia as deputy governor of Ibb governorate, deserted the educator Rashad Al-Jaafari with his family from his home.

Muhammad al-Jaafari’s son stated that the videos published by his father caused a great interaction and broad solidarity from activists and media, which forced the educated leader, Jamal al-Hamiri, to allow the family to return home after two months of displacement.

“We were glad to go back to our house, and we didn’t know that the Houthis would kidnap my father on the second day,” he added.

The family of the kidnapped al-Jaafari called on human rights organizations, jurists, activists, and all free people in the world to show solidarity with them and pressure the Houthi militia to release him.

Al-Sahwa Net news website And prevent Awakening Net displacing him distance Entry Exams From his children his house.. Houthi Jaafari Kidnapped Militias .. the awakening the teacher To whom

The Minister of Information, Culture and Tourism, Muammar Al-Eryani, condemned the targeting of the Houthi militia terrorist Iran-affiliated Al-Thawra Hospital ...

The Minister of Information, Culture and Tourism, Muammar Al-Eryani, called for an international position on the continuation of the Houthi ...

Jurists and researchers affirmed that the march of the Houthi militia is a history of bloodshed, and that the survival ...