Al-Aidarous Mosque in Aden, an archaeological architectural masterpiece, is threatened with collapse

The city of Aden has been known for its religious buildings and monuments since a long time ago, and through the stages of its Islamic history, a number of mosques, corners, ligaments, and religious schools were built there, some of which were destroyed and rebuilt, some were constantly restored or built again, and some were destroyed and no trace remained.

Among the most famous and oldest of those monuments that remained in Aden, the Al-Aidarous Mosque, which is one of the most famous historical monuments in Aden, was built and built in the year 1484 AD and his year (899 AH) boiled in the hand of Imam Abu Bakr bin Abdullah Al Aidarous Al-Saqqaf, which is the first work he did after his establishment In Aden.

According to historians, the Al Aidarous Mosque was not only a place for the establishment of religious rituals, but it was a school of Sharia and ethics since the foundation of the mosque, where the students of knowledge had lost a crowd who loved the councils of scholars and many scholars from the Al Aidarous family resided in it.

Al-Aidarous Mosque in Aden became one of the oldest and most prominent mosques in the city of Aden, facing the risk of falling after the appearance of cracks that hit the historical dome and the roof of the mosque as a result of rain, and the maintenance operations stopped since it was renovated and its current construction in 1274 AH / 1895 CE and some maintenance and restoration work was done to the mosque in 1430 AH / 2009 AD.

The importance of the mosque

The importance of this mosque lies in the fact that it was linked to the memory of the city by visiting Al-Aidaroos and its institute receiving students from various countries of the world. Al-Aidarous Mosque is one of the most famous landmarks of the city of Aden and is visited by many tourists visiting the city of Al-Aidaroos.

Al-Aidarous Mosque was established as a small mosque in the year 1484 AD by the cleric Abu Bakr bin Aidallah Al-Aidarous after his arrival in Aden, and then it was restored during the British colonial era and its image was used on postage stamps in Aden as it is the most important archaeological and religious monuments in it.

The mosque has a high lighthouse built of black gypsum stone, and four prominent wooden mashrabiyas used to raise the five prayer callers, in addition to the colorful artistic and engineering decorations on the limestone plaster above the entrance and decorate the dome in addition to the wood used in the doors, windows and coffins.

What distinguishes this mosque and other Yemeni mosques is the way to cover it, and it is often flat wooden ceilings, but these ceilings were decorated with wooden ornaments according to an artistic and industrial style that was known as wooden beams in the sense of dividing the ceiling into rectangular and square areas of several levels, filled with engraved and prominent ornaments. Colorful. This appeared in Yemen before other Islamic countries. “

Today, this archaeological and historical landmark is a victim of neglect, and it is threatening to fall at any moment as a result of stopping maintenance and restoration work. 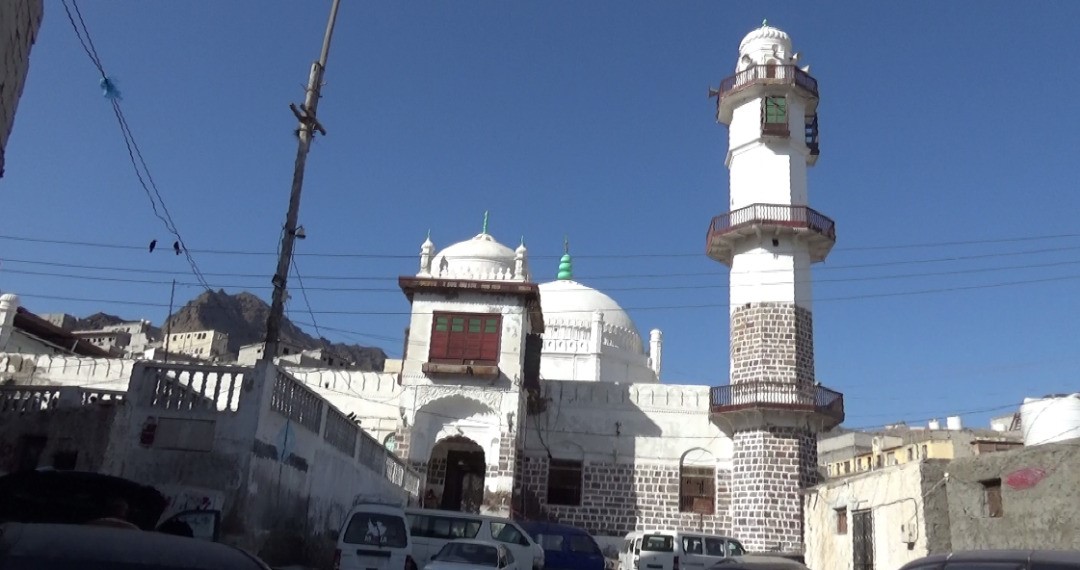 The Chief of the General Staff, Commander of Joint Operations, Lieutenant General Saghir Hammoud bin Aziz, confirmed the Ministry of ...

The Rights and Information Committee in Al-Jawf Governorate monitored 8,998 violations of the right to education in the governorate during ...

The Yemeni Congregation for Reform in the Ma’rib governorate mourned its leaders, bases and supporters, and to the people of ...