Al-Arada: Foreign experts manage battles for Marib and the coalition thwarted the mullahs’ plot and broke the Houthi arrogance

“The Coalition to Support Legitimacy in Yemen, led by Saudi Arabia, aborted the bloody Iranian plan in Marib in particular and Yemen in general, and contributed strongly to preserving the Arab identity of Yemen, preventing its transformation into a terrorist hotspot, preventing the continuation of the bloodshed of the Yemeni people, and stopping the sabotage and destruction that the Houthi pursued with the full support and support of the regime. The terrorist mullahs ».. With these words, the governor of Ma’rib, Sheikh Sultan Al-Arada, began his dialogue with“ Okaz, ”in which he revealed for the first time the Khamenei regime’s plan to control Marib by providing weapons and missiles to the Houthis.

Al-Arada, who was speaking to “Okaz” from one of the fronts over the phone, confirmed that the military situation in Marib is in our interest, and the army, the resistance and the tribes are writing today an honorable history with great sacrifices from the dearest men and youth of Yemen, and until now this militia’s arrogance has been broken and we will witness its defeat, God willing, soon. .

He continued, saying: “The great results achieved by the Yemeni army, the resistance and the tribes would not have been achieved except by the grace of God and then with the support of the Arab coalition that succeeded in thwarting the Iranian-Houthi plot to control Marib.”

Al-Arada revealed that Iranian, Syrian and Lebanese experts are running battles in Marib and training the militia, confirming that there are Hezbollah dead in the battles of Marib. Sheikh Al-Arada spoke in detail about the great successes that have been achieved militarily, politically and in development, which are supported and financed by Saudi Arabia through the Saudi Program for Development and Reconstruction of Yemen and the King Salman Relief Center … and to the text of the dialogue:

• First of all, what is your evaluation of the initiative launched by the Kingdom to end the Yemeni crisis and reach a comprehensive political solution, which includes a comprehensive ceasefire under the supervision of the United Nations?

President Assad: In fact, we were briefed with great interest on the courageous and historic Saudi initiative to end the Yemeni crisis and reach a comprehensive political solution, which includes a comprehensive ceasefire under the supervision of the United Nations … and this is not surprising from the Kingdom of Saudi Arabia, which has stood with the Yemeni people, and is always with the replacement Security and peace in Yemen and an end to the Houthi occupation supported by the Iranian terrorist regime and the refusal to spread sectarian ideology and attempts to turn Yemen into a focus of sectarian terrorism … But the Kingdom and the legitimate Yemeni government, unfortunately, did not find a party to abide by the agreements, treaties and decisions of international legitimacy, in addition to its lack of understanding and political awareness of the meanings and values ​​of peace. . We were and are still supporting the establishment of peace, security and peaceful solutions to ensure that Yemen will restore its state and its institutions according to the three references represented by the UN decisions, the Gulf initiative and the outcomes of the national dialogue.

• But the Houthi militia rejected the initiative and continued the war in Marib, launching Iranian-made missiles and marches against civilian objects and Saudi oil installations?

President Assad: As I told you, we support this courageous and historic Saudi initiative, as long as it finds acceptance and implementation on the ground, and the position of the legitimate government and the Yemeni Ministry of Foreign Affairs is fully supportive of this initiative .. But we are used to this coup militia to strike at the wall with initiatives and agreements and are not respected or committed With the initiatives keen to cease fire and war and alleviate the suffering of the Yemeni people and exploit them to achieve their goals that will not be achieved, God willing, because the Yemeni people continue to defend their lands.

• Do you think that the Kingdom has fulfilled its duties to support the legitimacy and specifically the situation in Marib in particular?

President of the Kingdom of Saudi Arabia has fully fulfilled its duty, and I say to the Custodian of the Two Holy Mosques King Salman bin Abdulaziz and the Crown Prince: “May God give your faces.” … The Kingdom’s positions are crystal clear and do not need to be clarified, and these positions stem from a well-established strategy based on brotherhood, neighborhood and a common destiny, and the Kingdom has a prominent and pivotal role in this field with the Arab and Islamic nation, and Marib has been and is still at the core of the Kingdom’s interest and enjoys privacy in relations. Between the two countries.

To what extent is there coordination with the Arab coalition to support legitimacy in the battles for Marib?

President: I assure you that coordination is continuous and integrated through the joint forces of the coalition and with the Ministry of Defense and the operation rooms concerned with the national army, and the Kingdom of Saudi Arabia has spared no effort at any moment to stand by the national army to defend Marib and the displaced, and I find it an opportunity to appreciate the position of the Arab coalition to support legitimacy In Yemen to achieve the truth and support the Yemeni people.

• Is it possible to shed light on the nature of Saudi support for development in Marib and the projects financed by the Kingdom?

The support is very large and unparalleled, and there is tangible development support in the aspects of education, water and higher education according to specific plans and programs, and there are road projects through the Saudi Program for Development and Reconstruction of Yemen, most notably the Al-Abr Road, as well as the Ma’rib regional airport project, whose phases have been completed. The preparatory, stopped for temporary reasons, will disappear and work will resume soon, God willing, and other projects, and this is a matter that is highly appreciated, whether by us in the local authority or society in general.

• The Houthi military campaign against Marib coincided after President Biden assumed power .. Why have the Houthis attacked Marib since the beginning of February?

President Assad: It should be clear to everyone, specifically in society, that the Houthi movement is a project of devastation, killing and death since its inception, and the Houthi goal and its main tendency is the bloody subversive tendency that stands behind all the devastation, destruction and killing that befell Yemen, then if this militia cancerous plant is mixed with the Iranian sectarian terrorist project Its danger to Yemen was doubled by an identity, civilization and state, not only to Yemen, but also to the entire region, as this coup militia became the longest arm of the Iranian terrorist plot in the region.

• Where have the military operations reached and the most prominent successes you have achieved?

President Assad: I confirm that the military situation is in our interest, praise be to God. In terms of battles, the army, the resistance and the tribes are writing today an honorable history with great sacrifices from the dearest men and youth of Yemen, and until now the arrogance of this militia has been broken, and thus we will witness its defeat, God willing .. The great results achieved by the Yemeni army, the resistance and the tribes were only achieved by the grace of God and then with the support of the coalition. The Arab who succeeded in thwarting the Iranian-Houthi plot to control Marib.

• So what is the size of the losses the militia suffers, and are there Iranian victims?

President Assad: There are huge losses in the ranks of the militias, and the Houthis are dealing with abominable class and sectarianism with the tribesmen and throwing them into battles with force and injustice and in huge numbers without any consideration of what they will face, and this hurts us, but with Allah’s permission, all Yemen will wake up and shake off this malicious militia and restore it to its origin as a myth and past Painfully all Yemenis work to destroy it forever.

What about the dead Iranians or Hezbollah?

President Assad: Yes, there are foreign dead from Hezbollah, who officially recognized them in statements to their leader, who said that he is proud of having killed in the fighting between the Yemenis! There is information coming to us about the existence of houses for Iranian, Syrian, Lebanese and other nationalities that also support the Houthis with training and combat experience.

Can you explain to us the number of Houthi prisoners and the percentage of children among them?

President Assad: Perhaps you are watching in the media the scenes of children in the ranks of the Houthis, and the Houthis also publish pictures of the dead children themselves, which are large numbers that they kidnap from their families, mothers and fathers, and this is the Houthis’ persistence, they recruit children and are often ignorant, but rational people in all governorates that are under the control of the militia reject them They reject its project, and it will have their word, and the Yemenis will make their history and will not accept the continuation of this shame forever stigmatizing them.

• So how do you deal with children who are deceived by them?

President Assad: We have centers for the rehabilitation of captured children who have been recruited by the militia, and international and local organizations and the international and local media visit these centers constantly. We take care of these children because they are our sons, because they are children and sons of Yemen, and Yemen needs them in the future to build it, while the militia is fleeting.

• Are there really contacts and mediators between you and the Houthis to exchange prisoners and calm down?

A: The prisoner exchange takes place through a specialized committee, and the relevant authorities from the Ministry of Defense are with the authorities assigned to the presidency, and we have no relationship with that as a local authority.

Reactions are still taking place in response to the Houthi militia’s crime against civilians in Marib and killing 21 Civilians, ...

This morning, Saturday morning, the Association of Families of Sniper Victims and Mines was announced at a press conference in ... 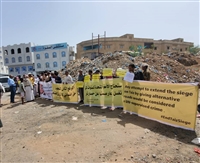 Vigils continue in the city of Taiz, for the second week in a row, to demand the lifting of the ...