Top Stories Al-Bahsani: November 30 is an occasion that prompts us to unite efforts to combat Iran’s arm in Yemen

Al-Bahsani: November 30 is an occasion that prompts us to unite efforts to combat Iran’s arm in Yemen

The Governor of Hadhramaut Governorate, Commander of the Second Military Region, Major General Faraj Salmeen al-Bahsani, said, “The 30th of November is an occasion that pushes us towards galvanizing and uniting energies and efforts towards fighting the rogue terrorist Houthi militia, the arm of Iran in Yemen.”

In an interview with him, “26 September newspaper”, coinciding with the 54th National Independence Day, the 30th of November, he stressed that all militants know the value of this great event, the emblem of independence, which all the sons of the country participated in in Aden, Hadhramaut and other regions after the struggle A great patriot and giving without limits.

He renewed the pledge to the political leadership, represented by Field Marshal Abd Rabbo Mansour Hadi, Supreme Commander of the Armed Forces, to walk the path of the September 26 and October 14 revolutions, adhering to their principles and loyal to the blood and sacrifices of the martyrs who fell in order to achieve national independence.

He pointed out that his recent visit to the camps and military and security units aimed to determine the readiness of these units and evaluate each military unit, stressing the importance of training in building the army.

Major General Al-Bahsani touched on the security achievements in the governorate, praising the efforts of the security services, stressing that the achievements at all the security, military and development levels would not have been achieved on the ground without the unlimited support of President Abd Rabbo Mansour Hadi, the Supreme Commander of the Armed Forces.

He also stressed that the military and security units find high appreciation from the citizens for their role in defeating terrorism.

30 Al-Bahsani: Al-Sahwa Net news website arm Awakening Net Efforts fight in a Iran Nov push us suitable the awakening to unite To whom

The Iranian Houthi militia’s machine does not stop killing Yemenis on a daily basis, most of whom are children and ... 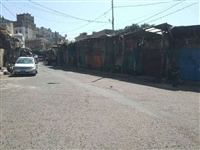 Traders in Al-Mahwit Governorate started a comprehensive strike, in protest against the non-stop levying campaigns and their blackmail and threats ...

The Yemeni Trade Union Coalition said that it stood before the armed attack by the Houthi coup group on the ...