The Houthi militias have returned again to target what remains of the medical sector in their areas of control. Earlier this week, the Houthi militia took a new package of decisions in the capital, Sana’a, which were described as “blackmail and arbitrary.”

Workers in the health sector in Sanaa revealed that the group, through the Ministry of Health under its control, took a number of new decisions a few days ago to close about 110 private medical facilities in Sana’a, of which 86 were completely and 24 partially, and to withdraw the licenses of dozens of health centers to extort their owners financially. .

The medical sources quoted the Houthi leader, Taha al-Mutawakil, who was appointed by the group as Minister of Health in the unrecognized coup government, saying that “these decisions come in the context of a new and extensive evaluation process for more than 656 medical facilities in the capital, Sana’a.”

According to militia media sources, the Houthi leader, who is one of the group’s experts and one of the most fanatical of its ideas, announced that the alleged evaluation process of medical institutions and centers is still ongoing and will expand in the coming days to reach other institutions and facilities located in governorates and cities under the group’s control.

While the group justified the reasons for taking those decisions against the medical sector in its areas of control as being due to its failure to comply with the instructions, controls and procedures it had set earlier, medical sources in Sana’a indicated that the recent Houthi decisions and those that will be taken in the coming days are all within the context of the systematic looting policy and campaigns. Extortion, looting and systematic destruction of the right of the people of this sector.

Medical sources in Sana’a confirmed to Al-Sharq al-Awsat that the group’s leadership refused to reopen 110 medical facilities that were directed to close them, on condition that they reopen in exchange for payment of sums called “disciplinary fines.”

In the same context, doctors and health workers in Sana’a indicated that the new Houthi targeting campaign comes at a time when the health sector in its areas of control is still suffering from destruction, tampering and organized extortion.

Health workers who spoke to Asharq Al-Awsat say that “the group, under the pretext of violating prices and not adhering to its rules taken to confront the new (Covid-19) pandemic, which spread frighteningly in its areas of control, has launched massive targeting campaigns that resulted in the closure of at least 8 »Hospitals and health centers, 170 pharmacies, 25 pharmaceutical companies and 8 drug stores in the capital, Sana’a, under the pretext of not adhering to the group’s controls.

The group also approved earlier this year the closure of more than 12 hospitals and health centers under the same pretext of violating Houthi instructions and controls before reopening them after paying sums exceeding 5 million riyals for each health unit that was closed (the dollar is about 600 riyals).

This series of repeated Houthi attacks against the medical sector comes at a time when Oxfam International, in its latest statement, warned that Yemen is at risk of a second wave of the outbreak of the Corona virus.

The organization’s office in Yemen stated that “Oxfam’s response to the (Corona) pandemic includes support for the health care system in Yemen, to help it cope with the deadly risks of the virus.” He pointed out that “Yemen is at risk of a second wave of the (Corona) virus outbreak.”

Meanwhile, the United Nations Office for the Coordination of Humanitarian Affairs in Yemen revealed in the middle of last week, that health partners have documented 163 attacks on hospitals and other medical facilities across Yemen since the beginning of the war, which was ignited by the Houthi militia.

“Half of the health facilities across the country are currently operating, and the majority of those that are operating are facing shortages of medicines, supplies, equipment and staff,” the office said in a statement.

The statement indicated that the Houthi militia’s attack on Al-Amal Cancer Hospital in Taiz on October 24 resulted in the injury of health workers and damage to the facility, and the patients, most of them children, were left in a state of panic.

Likewise, Lise Grande, the humanitarian coordinator in Yemen, said, “Any attack on any health center is unacceptable.” “The attack on the cancer hospital, where severely ill children receive life-saving treatment, is abhorrent,” she added.

And she continued: “The health system was already overburdened before the outbreak of the (Corona) pandemic, and we are no longer able to provide the same level of support that we got in the past. Because we do not have the funding we need. ”

She emphasized that “9 million Yemenis will lose access to basic health services by the end of the year if we do not get more support.” “If we are forced to reduce or stop our health programs, the effect will be immediate, unimaginable, and possibly irreversible,” she said.

According to the United Nations Office for the Coordination of Humanitarian Affairs, Yemen “continues to live in the world’s worst humanitarian crisis, where nearly 80 percent of the population – more than 24 million people – need some form of humanitarian assistance and protection.”

Dr. Muhammad Salih Mohsen, Assistant Secretary of the Executive Office for Reform in Al-Jawf Governorate emphasized that defending the republic ...

The Director of the Moral Guidance Department at the Ministry of Defense, Brigadier General Ahmed Al-Ashwal, confirmed that the National ... 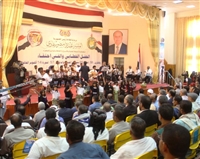 Today, the leadership of the local authority and the office of the Ministry of Culture in Hadhramaut and the Sahara ...