The terrorist Houthi militia stormed a mosque in the capital, Sanaa, during Tarawih prayers, which led to great chaos in the center of the mosque, which angered the residents of the neighborhood.

Residents of the “Al-Asima Online” website stated that the Houthi militia stormed the “Ahmed Nasser” mosque on Hayel Street, in the center of the capital’s secretariat, and bypassed the worshipers while performing Tarawih prayers.

The residents explained that the Houthi militia stormed the mosque, with the aim of broadcasting and playing a recorded lecture of the militia leader, Abdul-Malik al-Houthi, through the mosque’s loudspeakers.

The storming operation provoked widespread altercations between the militia members and the worshipers, and the matter ended with the dispersal of everyone from the mosque, including the imam, who preferred to leave, while the militia broadcast the lecture.

With the advent of the blessed month of Ramadan, the militia’s Ministry of Endowments directed all mosques of the capital’s secretariat to broadcast a lecture to the militia leader from half past eight until ten in the evening.

During the first nine days of Ramadan, the Houthi militia committed more than twenty-two violations against the mosques of the capital, including an attack with weapons, which killed two worshipers in the airport district, and injured seven others.

Local sources in Dhamar Governorate reported that the militia cemeteries in the governorate are becoming narrower with the number of ... 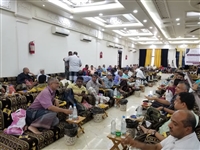 Today, Saturday, a mourning ceremony was held for the death of the great Professor Salem Muhammad Abdullah Mughales, Chairman of ...

Prime Minister Dr. Maeen Abdulmalik received today in the temporary capital of Aden, the European Union delegation and ambassadors of ...