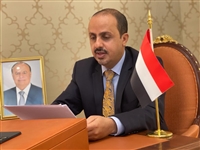 The Minister of Information, Culture and Tourism, Muammar Al-Iryani, launched a global call for international organizations and donors to come to support the culture sector in Yemen, by joining UNESCO and the Republic of Yemen in efforts to preserve and promote Yemeni culture, to become a unique and valuable treasure for the future.

Minister Al-Iryani stressed, in the event organized by UNESCO via video call, today, Tuesday, that the Yemeni heritage is diverse and unique, expressing his pride in the progress made during the past months not only to protect Yemeni World Heritage sites such as Shibam, Sanaa and Zabid, but also to nominate Other sites from the temporary list.

He renewed the government’s commitment and the directives of His Excellency President Abd Rabbo Mansour Hadi towards the valuable efforts of UNESCO and the European Union, to preserve this distinguished heritage project in Yemen, referring to what the Yemeni heritage has been exposed to during the past seven years, and with it the lives of the inhabitants of the historical regions at risk, in addition to the climatic conditions that It also threatens the survival of the unique cultural heritage of Yemen, considering the deliberate destruction of the heritage as an attack on the identity of people, the livelihood of societies and peace.

The Minister Al-Iryani touched on the close connection between media, culture and tourism in preserving antiquities, spreading awareness about heritage, promoting a sense of ownership of heritage among young people, valuing it and disseminating its knowledge and global value, and its importance in shaping the Yemeni identity.

He praised the cash-for-work project funded by the European Union through UNESCO and which has been tried in Yemen in involving local communities in implementing urban rehabilitation work, by providing youth with daily wages and developing their skills..and he praised the success of the project team and implementing partners..and called on international organizations and donors to join To this initiative and help make it sustainable.

The minister touched on the systematic destruction of Yemeni antiquities during the past years, by looting, smuggling and selling, and direct targeting with bombing, bombing, and transfer to weapons stores and military barracks … affirming that Houthi leaders smuggled thousands of archaeological pieces and manuscripts out of Yemen after they were stolen from museums and archaeological sites.

He emphasized that the Ministry, despite the circumstances of the war, is doing everything in its power to preserve the heritage and antiquities and work to prevent their smuggling and sale, as well as trying to recover what was looted and smuggled, as it prepared a record and documentation of the looted and destroyed antiquities and manuscripts … looking forward to the cooperation of regional and international institutions in preserving this heritage Retrieve what was lost from it.

Al-Eryani urged the follow-up of training workshops next June through new online courses, and preparations for the ratification of the second protocol to the 1954 Convention on the Protection of Cultural Heritage in the Event of Armed Conflict, within the framework of combating illegal trade in cultural heritage artifacts, which organized training courses to support the establishment of an entity. Legal, can support the recovery of looted heritage and coordinate with international stakeholders such as INTERPOL and auction houses.

He referred to the importance of enhancing the status of Yemeni artists, referring to the effects they had suffered because of the Houthi war, stressing that the Yemeni government is working to ratify the 2005 agreement to support and enhance cultural expression.

Al-Eryani appealed to the concerned international organizations, led by UNESCO, to play their role in preserving the Yemeni cultural heritage through supervision and pressure on the responsible authorities to preserve the integrity of the manuscripts.

Al Houthi Al-Yemeni Before Curriculum Denounce From Iryani: militia Of the effects Sahwa Net Sahwa Net news site the awakening To destroy To whom

Not a day passes in Yemen without civilian casualties due to the mines planted by the Houthi militia during its ...

The pages of activists on social media yesterday were filled with a picture of a soldier fighting at the front ...