Top Stories Bin Mubarak: Marib has become a haven for the displaced, and the continuation of the aggression against it will lead to a humanitarian catastrophe

Bin Mubarak: Marib has become a haven for the displaced, and the continuation of the aggression against it will lead to a humanitarian catastrophe

Foreign Minister Ahmed Awad bin Mubarak confirmed that Marib has become a haven for millions of displaced people, noting that the continuation of the aggression against it will lead to a catastrophe. humanity Its effects will not be limited to Yemen only, which necessitates taking a political and moral stance to stop this barbaric aggression in order to avoid aggravating the humanitarian situation.

Bin Mubarak also touched on the absurd Houthi aggression on Ma’rib governorate and the militia’s targeting of camps for the displaced and civilian neighborhoods with ballistic missiles and drones.

This came during his meeting in the Swedish capital, Stockholm, with the Chairman of the Foreign Relations Committee in the Swedish Parliament, Kenneth G. Splond, who discussed with him the developments of the peace process in Yemen, and the prospects for a political solution in light of the Houthi militias continuing to obstruct and reject all peace efforts and initiatives. regional and international.

In the meeting, which was attended by members from different parties Represented in the Swedish Parliament, the Minister of Foreign Affairs explained the efforts made by the Yemeni government to achieve peace, the concessions it made and the flexibility it showed in dealing with regional and international initiatives and proposals to reach a political settlement to end the war and restore security and stability.. He pointed out that the Houthi militia is linked to the Iranian subversive agenda in the region. The political scene in Yemen has complicated and frustrated all the efforts made during the past six years to settle the conflict peacefully.

The Minister of Foreign Affairs referred to the militia’s continuous violations of women’s rights, its recruitment of thousands of children, sending them to the frontlines, changing education curricula and establishing summer centers to spread a culture of hatred and cloud Yemen’s future with ideas alien to society, its culture and history.

The meeting dealt with the issue of maritime and environmental security in the Red Sea, the increasing Houthi attacks on transiting ships, and the continuation of the environmental and humanitarian threat posed by the Safer oil reservoir. The necessary maintenance and an end to the militia’s manipulation of this sensitive file.

Aggression Al-Sahwa Net Al-Sahwa Net news website and persistence Blessing Disaster For the displaced Humanity I became Marib .. on her the awakening The son of to me To whom why will lead

The security services in At-Tuhayat District, south of Hodeidah, overthrew a cell of the Houthi coup militia, backed by Iran, ... 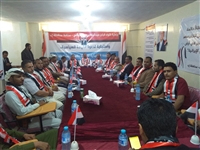 Today, Wednesday, the National Army in Taiz Governorate handed over large quantities of gold and money to their owners, after ...