The Minister of Foreign Affairs and Expatriates Affairs, Dr. Ahmed Awad bin Mubarak, met today with the Special Envoy of the Secretary-General of the United Nations, Hans Grundberg, to discuss the latest developments on the Yemeni arena and the efforts of the Special Envoy to revive the peace process in Yemen.

The Foreign Minister heard from the Special Envoy the results of his recent consultations with the Yemeni political and social components aimed at setting a framework for a comprehensive political dialogue that ends the war and establishes a sustainable peace in Yemen.

The minister reiterated the Yemeni government’s support for the Special Envoy’s efforts and endeavors to find solutions that include immediate priorities and long-term solutions.

He pointed to the importance of holding Yemeni consultations under the umbrella of the Cooperation Council for the Arab States of the Gulf to discuss ways to resolve the Yemeni crisis. He stressed that the government welcomes all efforts and initiatives aimed at stopping the war and ending the suffering of Yemenis in accordance with the national constants and the three approved references.

He called on the Houthi militia to listen to the voice of reason and to take advantage of the initiative of the Cooperation Council and to engage with the Yemeni forces in the Riyadh consultations to work to get Yemen out of its ordeal and achieve the desired peace based on national constants and approved references.

The foreign minister said that the government’s position always welcomes all international and regional calls, the latest of which was the Saudi initiative, which was clear in calling for a comprehensive cease-fire. It has also engaged in serious and positive discussions with the UN envoy to Yemen from the outset of his appointment in order to reach an approach that guarantees a comprehensive ceasefire. And a real treatment of all humanitarian issues related to the lives of our citizens in all parts of the country without discrimination, which were caused by the two coups and led to the suffering of citizens in all governorates of the Republic.

He added in a press statement after his meeting with the UN envoy, “The Yemeni government deals with full responsibility with all the consultations called by the Gulf Cooperation Council countries and similar UN calls that would alleviate the suffering of the citizens.”

Bin Mubarak reiterated that the escape of the putschists from confronting these demands by launching empty and irresponsible initiatives that do not deal with the foundations of the problem and its revolution against the state indicates a lack of seriousness and a failure to deal responsibly with the humanitarian and economic conditions imposed by the war, which are exacerbated frighteningly with international crises and whose effects will be reflexively Terrible for Yemenis.

He pointed out that the conditions in the country require a great deal of human conscience and moral responsibility and to stop absurd initiatives and empty political intuition.

Once again the call to respond to the voice of reason and to deal responsibly with the call of the Cooperation Council for the Arab States of the Gulf and to invest this initiative and international efforts to work to get Yemen out of its ordeal, end the suffering of its people, achieve the desired peace based on national constants and approved references, and take advantage of the advent of the month of Ramadan in which the meanings of mercy and humanity are manifested to stop the bleeding Yemeni blood and alleviating the suffering of Yemenis who are paying the price of this war, and they deserve to live in peace and prosperity.

Today, the Minister of Foreign Affairs and Expatriate Affairs, Dr.Ahmed Awad bin Mubarak, held a meeting with the European Union’s ...

The Arab Parliament warned against the Houthi militia’s continued manipulation of the file of the Safer reservoir, changing its positions ... 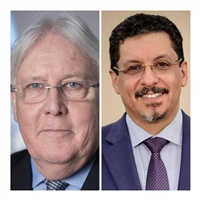