Top Stories Brigadier General Haykal Hantaf: The army and resistance forces continue to advance towards the city of Al-Hazm

Brigadier General Haykal Hantaf: The army and resistance forces continue to advance towards the city of Al-Hazm

This came after a qualitative military operation carried out by the army today, Tuesday, backed by the air force of the Coalition to Support Legitimacy, through which the army was able to regain many strategic sites in the Khub Washa`f district in the northern Al-Jawf governorate, including Al-Khanjar camp.

Brigadier General Heikal Hantaf confirmed to the Media Center of the Armed Forces that the army was able to take full control of the strategic Al-Khanjar camp, the mountains overlooking it, and many strategic sites surrounding it, most notably the “Al-Barka area” and the “White Rugib Mountain” and other important sites.

He added that the air forces of the Coalition to Support Legitimacy actively participated in the battle, and they struck precise strikes that targeted the fortifications and reinforcements of the militias, which caused heavy losses in lives and equipment, in addition to the human and material losses they incurred by the heroes’ fire during the battles that took place this morning.

Brigadier General Hantef pointed out that the heroes of the army had recovered a number of vehicles and combat crews and quantities of various weapons and ammunition that the militias had left and fled under the blows of the heroes.

The Ministry of Foreign Affairs and Expatriate Affairs reaffirmed the Yemeni government and people standing with the brothers in the ...

The Houthi militia does not tire in committing crimes against Yemenis throughout the day and the hour, a new massacre ... 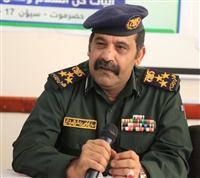 The Director General of Security and Police in Hadramout, Wadi and Sahara Governorate, Brigadier General Mubarak Al-Awbathani, confirmed that security ...