Top Stories Defense Minister: Stability and peace in Yemen will be achieved by defeating the Iranian project

Defense Minister: Stability and peace in Yemen will be achieved by defeating the Iranian project

Defense Minister Lieutenant-General Muhammad Ali al-Maqdashi said that the battle that the army and the Yemeni people are waging with it is the nation’s battle against the Iranian sectarian project that seeks to tear our Arab and Islamic nation apart.

The Minister of Defense stressed, in an interview with Yemen TV, that the armed forces are on their way to finish off the Iranian project, achieve security and stability for Yemen, and return it to its Arab and regional surroundings as a positively active state, not as Iran and its tools want it to.

He touched on the beginnings of efforts to regroup officers and members of the army since May 2015 in the Al-Abr area of ​​Hadramout, and then support the popular resistance that had begun in Marib, Taiz, Aden and in all governorates.

He said that the response of the army’s new recruits and volunteers was wide, and the free people from various regions and governorates rose to meet the call of duty in defense of their homeland, their republic and their revolution.

Pointing to the difficult conditions that the country was going through and the army heroes lived in at the time, but all the officers and soldiers showed great perseverance, dedication and solidarity and made a great epic that broke the ambitions of the enemy and achieved many victories and they are still on the covenant and promise.

The Minister of Defense indicated that the army forces and the people behind them continue to fight the national battle throughout the theater of combat operations from Bab al-Mandab to Al-Dhalea, Marib, Al-Jawf, Saada and Hajjah, despite the difficult economic and military conditions that the country is going through.. He stressed that victory will be achieved for Yemen and the building process will continue The military establishment is based on purely national foundations so that its loyalty to the homeland is based on the approach of the great revolutionaries of September and October.

The Minister of Defense praised the high patriotic sense of the leaders and heroes of the army, which enabled them to endure difficult circumstances and scarce capabilities.. He stressed that it is the national loyalty of the heroes that will achieve victory and upset the scales, since the goal for which they are fighting is to defend the homeland and the people’s freedom, choices and defense On the belief and dignity of the Arab nation.

Lieutenant-General Al-Maqdashi stated that the armed forces sacrificed the best of its leaders and members in this sacred battle in the face of the Iranian project.. He explained that all the army leaders are officers who lived in the womb of the military establishment, and some of them fought in the September and October revolutions, and that the process of rearranging the ranks of the army and rehabilitating and training its members, As well as the management of combat operations is carried out by officers from graduates of military colleges, who have been raised on discipline and national loyalty, and that the military institution is governed by law and order.

The Minister of Defense indicated that the Houthi gang is fighting the Yemenis with a militia that has attracted them from the streets and given them ranks and claimed that they are officers and deceived many of the people and pushed groups of them to the incinerators for the sake of racist illusions.. He added that the armed forces and the Free Yemen are fighting to rid the citizens in the militia-controlled areas of The crimes and violations committed by the militia against them, as well as the achievement of security and peace for all Yemenis.

He said, “We will not be reassured about the homeland until after the elimination of the Houthi project, whose end is near, and our confidence in our men in the field and in the Yemeni people in all its sects to achieve the desired victory.”

Minister Al-Maqdashi added that the Yemeni people answered the call from the first battle, and that Marib withstood and all the people of Yemen fought with it, and the convoys of support and support are still coming from all the provinces.” He stressed that the heroes of the army are moving towards completing the liberation of all the soil of the country.

The Minister of Defense thanked and appreciated the political leadership represented by the President of the Republic, Field Marshal Abd Rabbo Mansour Hadi, his deputy, Lieutenant-General Ali Mohsen Saleh, and the Prime Minister, Dr. Moeen Abdul Malik, pointing to the leadership’s attention and care to the military institution and its efforts to provide the necessary needs for fighters.

On the efforts of the military institution in combating terrorism and protecting international corridors, the Minister of Defense said: We are partners with the international community in combating terrorism, as well as with our brothers and friends, and we have a leadership to combat terrorism linked with brothers and friends, and the navy and coast guard forces patrol the Red Sea and the Arabian Sea. According to the available capabilities.

He added that the Yemeni armed forces are carrying out efforts to combat terrorism and protect maritime navigation in coordination and cooperation with the political and national security agencies and the fight against terrorism.

He said, “We are waging a major war in more than one direction with militias and terrorist groups that threaten the security and stability of Yemen and the region…and our country will not be stable unless the militia and terrorist organizations are eliminated.”

Al-Maqdashi expressed his thanks and gratitude to the brothers in the coalition to support legitimacy led by the Kingdom of Saudi Arabia, and for the leadership of the joint forces that stand by the Yemeni people and their armed forces in the battle of a common destiny.

Al-Sahwa Net Al-Sahwa Net news website and peace at Defense: Iranian minister On stability the awakening The project To whom victorious will come true

The joint forces announced in the western coast that 127 violations and violations of the UN armistice committed by the ... 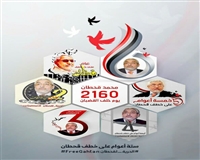 Six years of concealment, kidnapping and deprivation pass by the family of Professor Muhammad Qahtan, waiting for someone to answer ...

The family of the kidnapped Sheikh Abdul Qader Al-Shaibani (70 years) organized a protest stand in front of the building ...