“We did not feel that we were on Eid .. There were no joyful things anymore .. It was as if it was an ordinary day .. The difference is very big between Eid in the past and Eid now.” With these words, Hussein, 27, summed up his impression of Eid al-Fitr that passed For the Yemenis under extremely harsh conditions, especially in the Houthi-controlled areas.

Hussein added in an interview with As-Sahwa Net: “Most of those I saw were wearing normal clothes and staying up late and feeling tired on their faces. Personally, I could not buy anything for myself, and I was content to buy cheap dresses for my two young girls, and some of the money I bought in very small quantities compared to previous years.” Through an amount I borrowed from a family member, and the matter passed in peace. What is important is health. “

The fourth feast without games

As for “Saddam”, who is 35 years old, expressed sadly about the Eid, saying, “The most difficult thing we lived during Eid was seeing the sadness on the faces of my children, who could not buy toys as I did before. This is the fourth year that they live without toys. Buying some clean clothes for them to bring joy to their hearts, even though I have become overwhelmed with debt. As for the games, I could not buy them because of the difficult conditions. I hope my children will grow up and know that Yemen was occupied by Iranian groups and forgive me for my failure to do their right.

Abdul Khaleq, 42, says, “Before Eid, I borrowed an amount of money in order to be able to“ insult ”women and children who are not guilty of what we are experiencing in terms of oppression and deprivation. We are the ones who brought the Houthi into Sanaa and we accepted him, not the women and children, so we will not let them bear the result of our mistake. These are decades of inherited customs, and we will not change them at all costs. As for clothes, my brother from the Gulf sent some money to buy clothes for children, may God bless him, and without him I would not have been able to see my children in Eid clothes. “

Zuhair, 30, says, “The real Eid is a day that Yemen is liberated from the grip of the terrorist Houthi militia and the people start to breathe again. This holiday passed with great difficulty and you knew this from just looking at the faces of people on the street, where is the joy and spirituality that we used to feel before.” ?

Zuhair added, “I have a boy and a girl children for whom I bought modest Eid clothes from the month of Rajab and I did not fall into the trap of merchants who raise prices madly starting from mid-Shaban. God has” suffered “on the other requirements of the holiday. This people is alive no matter how the Houthi terrorists try to kneel it down, and we will continue to celebrate. Eid and we await the great liberation day, God willing. “

As for the 34-year-old Alia, she says: “Praise be to God, however, the Eid has passed and despite the circumstances created by the Houthis, we were able to draw a smile on the faces of our sons and daughters, and now my husband and I will devote themselves to work in order to pay off the debts that we borrowed to buy the Eid supplies.”

“Ali”, a guard of a park in the Capital Municipality, says: “Frankly, the turnout for parks and parks was very weak this year compared to previous years, and the reason is known to the whole people, and even the visitors who came most of them chose free outdoor games and only cut the entrance ticket, which clearly indicates The extent of the state the people have reached, but despite all that there was joy and the smile of the children forgot everything and filled you with hope that salvation would come one day at the hands of those little ones who play before you. 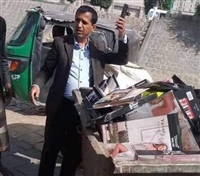 At a time when Yemen is facing the largest wave of prices, economic collapse and successive crises that it has ...

A human rights organization monitored dozens of crimes and violations committed by the terrorist Houthi militia against the people of ...

The deceased Sheikh Ali bin Saleh Shatif, head of the Executive Office of Islah in Al-Jawf Governorate, had major national ...