Top Stories Government: Targeting communication towers in Marib is a Houthi attempt to hide its crimes against civilians

Government: Targeting communication towers in Marib is a Houthi attempt to hide its crimes against civilians

Muammar Al-Eryani, Minister of Information, Culture and Tourism, condemned the Iranian-backed Houthi militia’s targeting of communications towers of Sabafon and SabaFon companies. MTN In the Jabal al-Balaq region, with an “Iranian-made” ballistic missile, and the service was out of the city of Ma’rib and the Wadi District.

Muammar al-Eryani said in a statement to the Yemeni News Agency (Saba) that this targeting is an attempt to isolate the Marib governorate, and to cover up the war crimes and crimes against humanity committed by the Houthi militia against civilians and the displaced in the governorate.

pointed Al-Eryani indicated that this sinful targeting is an extension of the scorched-earth policy pursued by the Houthi terrorist militia since its coup against the state, and its deliberate targeting of infrastructure such as government buildings, roads, tunnels, bridges, communications networks, electricity and water, and its systematic destruction of the national economy and the private sector.

Al-Eryani called on the international community, the United Nations, and the UN and US envoys to leave the square of silence and condemn the acts of killing and sabotage launched by the terrorist Houthi militia in various regions, especially the governorate. ‎Marib, which reveals aggressive and criminal behavior that has exacerbated the tragedy of the war and the suffering of Yemenis.

Receiving the Eid and preparing for it amid the difficult circumstances imposed by the Houthi militia on various aspects of ... 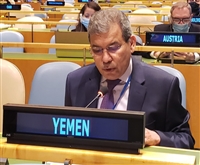 The Yemeni government affirmed that Yemeni women not only bear the burden of defending their rights, but also defend national ...

The Minister of Information, Culture and Tourism, Muammar Al-Eryani, considered that the honoring of the head of the government of ...