Top Stories Government: The terrorist operations of militias against civilians in Marib are a flagrant challenge to efforts to bring peace

Government: The terrorist operations of militias against civilians in Marib are a flagrant challenge to efforts to bring peace 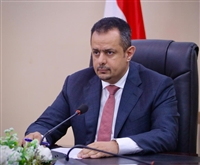 The Yemeni government said that the terrorist operations committed by the Houthi militia against civilians and displaced persons in Marib and targeting their camps are a flagrant challenge to the international efforts and movements to bring peace to Yemen, and embody the reality of the bloody and racist project of these militias that are subject to the Iranian regime’s agenda.

Prime Minister Maeen Abdul-Malik confirmed, during a phone call with the governor of Marib, Major General Sultan Al-Arada, that the disgraceful and continuous actions of the militias against civilians and displaced persons in Marib and other areas of Yemen confirm their unwillingness or delinquency for peace.

During the call, the Prime Minister was briefed on the details of the military and field situation and what the heroes of the National Army, Popular Resistance and tribesmen are providing by the Yemeni people to thwart the suicide attacks of the Houthi coup militia on the outskirts of Ma’rib governorate, on the way to completing the liberation of all Yemeni soil and ridding the homeland of the evils of this coup gang.

He also learned from the Governor of Marib about the service and development conditions in the governorate, as well as the efforts made to deal with the second wave of the Corona pandemic, in addition to the conditions of the displaced and the systematic targeting of Houthi camps with missiles, missiles and drones, and the new wave of displacement that this caused.

The Prime Minister praised the effective performance of the leadership of the local authority in the Ma’rib governorate and the security and executive bodies in running the service and development work, establishing an atmosphere of stability, arranging its priorities successfully, and the government’s full support for these efforts.

Noting the heroic fighters of the national army, popular resistance, tribesmen and the Yemeni people in various fields of pride and honor as they courageously defend Yemen’s land and its gains in the face of a criminal priestly gang, and expressing its appreciation for the sincere fraternal support of the Coalition for Supporting Legitimacy led by the brotherly Kingdom of Saudi Arabia for the sake of Confronting the Iranian project and its sabotage goals in Yemen and the region.

In turn, the Governor of Ma’rib expressed his thanks for the prime minister’s permanent attention and follow-up to the developments in the field, service and development situations in the governorate, reviewing the efforts made to deal with various situations, especially in the humanitarian, relief and health aspects, and the support required by the government.

a challenge against Civilians For efforts Government: operations In Marib Peace Sahwa Net Sahwa Net news site Substitute Terrorist the awakening To militias To whom Travel

Local sources in Sanaa reported that the terrorist Houthi militia loyal to Iran has intensified over the past few weeks ...

The UN Security Council rejected the use of the economy as a weapon in Yemen, and called for it to ...

The Yemeni Congregation for Reform in Amran Governorate, Sheikh Hamid bin Abdullah Al-Ahmar, member of the Supreme Commission for Reform, ...