Top Stories Government: We were keen to implement the Stockholm Agreement, but the results indicate the indifference of the Houthis

Government: We were keen to implement the Stockholm Agreement, but the results indicate the indifference of the Houthis

The Yemeni government said that it was keen to abide by the implementation of the Stockholm Agreement and interacted positively with all calls and initiatives, over the past five years, aimed at achieving peace and alleviating the suffering of the Yemeni people, but the results on the ground since that agreement clearly indicate the Houthis’s indifference or eagerness to implement its provisions. And exceeding its time limits, and emptying this agreement from its content.

Yemen’s permanent representative to the United Nations, Ambassador Abdullah Al-Saadi, indicated in the government’s statement to the open session of the Security Council on the Middle East situation that was held today in New York City, that the armed Houthi militias have continued to escalate recently in the Al-Durayhimi area in Hudaydah governorate and before them in Marib, Al-Jawf and Taiz. And its continued violation of the ceasefire and its use of Hodeidah as a platform for launching missiles and bombed drones on civilian neighborhoods, and the brutal targeting of public and private economic facilities, laying mines, targeting shipping lanes, arms smuggling, theft of humanitarian aid and looting of port revenues, constitutes a clear breach and infringement of the requirements of this agreement. .

He added that the recent bombing of the Houthi militia on a food industrial complex in the city of Hodeidah, and what it may cause in terms of doubling the humanitarian crisis, is clear evidence of this militia’s disregard for the lives and capabilities of Yemenis, in addition to obstructing and restricting the work of the United Nations mission to support the Hodeidah Agreement, which calls us Again, to the demand to move the mission headquarters to an area not under the control of the Houthi militia.

Al-Saadi stressed that the Yemeni government continues its full endeavor, under the leadership of His Excellency President Abd Rabbu Mansour Hadi, President of the Republic, to end the war imposed on its Yemeni people by the armed Houthi militias since 2014, and that the primary task before the Yemeni government and people today is to achieve a just, comprehensive and sustainable peace, which is based on On the terms of reference for the political solution in Yemen represented in the Gulf initiative and its implementation mechanism, the outcomes of the comprehensive national dialogue conference, and Security Council resolutions related to the Yemeni issue, especially Resolution 2216 (2015), which is an option that cannot be reversed. All of its citizens.

He pointed out that the government, to achieve this lofty goal, was keen to provide all support to the efforts of the Special Envoy of the Secretary-General of the United Nations, Mr. Martin Griffiths, and dealt positively with peace options and showed during the last period more flexibility, and made concessions and positive response to all the calls and proposals, including: That is the draft joint declaration, aimed at achieving progress in the comprehensive peace process, and it welcomed the Secretary-General’s call for a ceasefire and declared its unilateral commitment to allow the efforts made by Mr. Griffiths to reach a permanent and comprehensive ceasefire and resume the political process.

He added, “We extended our hands and dealt with flexibility with peace options and made many concessions in the hope that we would preserve our country that was exhausted by wars and disasters, and our hands were still outstretched. But unfortunately, the Houthi militias were only met with arrogance and intransigence and the rebellion of the Houthi militias against all agreements and understandings, as is their convention and style. The size of the obstacles and the insistence on continuing the devastation and war and trading in the suffering of the Yemeni people and the blackmail of the international community has doubled the suffering of the Yemenis. “

He stressed that the tampering in the economic file, the damage to the national currency, the looting of employees’ salaries, the conversion of the humanitarian aid file into fuel for war, the blackmail of the world with the tanker file, and the military escalation targeting cities with dense populations, as well as disrupting agreements, confiscating resources and fueling wars, are the best proof of the intransigence of these militias that Do not believe in the option of peace and dialogue. It was not satisfied with these violations, but worked and continues to tear apart the social fabric on sectarian, ancestral and racist grounds, disrupt state institutions, target education, spread myth and sectarianism, and hostile to all values ​​and calls for the revival of the Yemeni national identity.

On the progress of implementing the Riyadh agreement, Ambassador Al-Saadi said, “The Yemeni government, under the directives of His Excellency Brother Abd Rabbu Mansour Hadi, President of the Republic, and with the support of the brothers in the Kingdom of Saudi Arabia, has made a way in implementing the Riyadh Agreement, which aims to achieve stability, restore state institutions and unify national efforts to confront a coup The Houthi militias, and the confrontation of the Iranian project in Yemen and the region.

He pointed out that the government was keen from the outset to provide all facilities for the implementation of that agreement, based on conviction and concern for the need to unify efforts in achieving construction and development under the banner of the state, pointing out that the consultations that the Prime Minister-designate, Dr. Maeen Abdel-Malik, conducted with the political components reached Advanced stages for the formation of a new government, which will work to strengthen and not prejudice the national constants, on top of which is the security and stability of the unity and integrity of Yemeni territories. It will focus on providing services, saving the national currency and making the necessary reforms to activate the role of state institutions.

Ambassador Al-Saadi called on the international community to support and support the government’s efforts in facing economic and development challenges, and to support the national currency to achieve stability of living … pointing out that the Houthi militia coup inflicted heavy losses on the national economy, disrupted the development wheel, destroyed the private sector and caused the worst humanitarian catastrophe, and led millions of people. Yemenis are heading towards a line of poverty and famine, and creating the largest internal and external displacement wave that Yemen has not witnessed in its contemporary history, and the spread of the Covid 19 pandemic has exacerbated the humanitarian crisis and burdened the health sector, which suffers from scarcity of resources, capabilities, and weakness in its ability to confront this pandemic .

an agreement Except Implementation of Indicate Indifference Non On Results Sahwa Net Sahwa Net news site Stockholm that the awakening the government: The Houthis to me To whom We took care 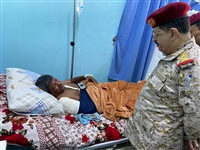 The Undersecretary of the Ministry of Public Health and Population for the health care sector said Primary manager The emerging ...

The Gulf Cooperation Council expressed its “total rejection” of the statements of the Lebanese Minister of Information, George Kordahi on ...