Top Stories Ibb..Houthi militia kills a citizen in a horrific way inside his house and in front of his children

Ibb..Houthi militia kills a citizen in a horrific way inside his house and in front of his children

The Houthi militia brutally killed a citizen in Ibb Governorate, central Yemen, in conjunction with horrific crimes committed by Houthi leaders and elements in the various districts of the governorate.

Local sources said that the Houthi militia killed a citizen in the Rawat area of ​​the Mudhakira district, southwest of Ibb Governorate.

The sources added that the victim, Talal Ahmed Murshid Al-Laith, was killed after the Houthi militia stormed his house and tampered with its contents, terrifying his family.

The sources reported that the Houthi gang that killed Al-Laith is Mamoun Al-Jamra, who belongs to a Houthi leader and the children of Abd al-Rab Muhammad, the leader of al-Zumar.

The militia threw a hand grenade at the citizen’s house and used light and medium weapons, then stormed the house, and then broke the citizen’s neck and stabbed him several times, in front of his children.

After the crime, the militia took his body, and tried to collect signatures from the people accusing him of blocking roads and committing crimes, while the people rejected those attempts aimed at covering up and concealing the crime.

Al-Sahwa Net news website and in front of Awakening Net citizen Father his children his house.. Houthi in a way Inside Kill militia the awakening To whom ugly..

On Sunday, the Commander of the Third Military Region, Major General Mansour Abdullah Thawaba, inspected the heroes of the army ... 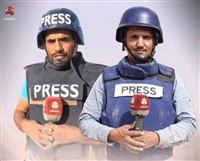 “Yemen Shabab” channel condemned the targeting of two of its reporters by the Houthi militia, today, Thursday, during their coverage ...