Yesterday, Monday, journalist Essam Belghith was transferred to a hospital in Ma’rib, to receive treatment after his health deteriorated due to complications from the diseases he had suffered in the prisons of the Houthi coup militia.By torture To whom he was exposed for more than 5 years.

The head of the Yemeni National Media Organization, Youssef Hazeb, said that colleague Issam Balghith was hospitalized after suffering a sudden collapse in his health for the second time in a month.

Colleague Belghith was recently released with four colleagues after five and a half years of kidnapping by the Houthi militia.

Hazeb added in a post on Facebook: “Unfortunately Issam brought us from the hospital to his residence and he is still in the same condition as he was.”

He pointed out that the health status of the journalists who were released is very poor, and you can imagine the scale of the humanitarian and health catastrophe suffered by those who are still in prisons, and the case of Tawfiq Al-Mansouri, which was recently released to the public, is an example of that.

The Yemeni Trade Union Coalition said that it stood before the armed attack by the Houthi coup group on the ... 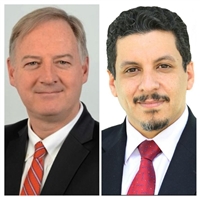 The Minister of Foreign Affairs and Expatriate Affairs, Dr. Ahmed Awad bin Mubarak, confirmed that the continued military escalation of ...

Minister of Information, Culture and Tourism Muammar Al-Eryani confirmed that the Houthi terrorist militia escalated its military operations on all ...