Top Stories Jurists: The Houthi project is stained with blood, and its survival poses a great danger to Yemen and the region

Jurists: The Houthi project is stained with blood, and its survival poses a great danger to Yemen and the region

Jurists and researchers affirmed that the march of the Houthi militia is a history of bloodshed, and that the survival of this militia constitutes a great danger not only to Yemen, but to its elements belonging to it, to the world and its interests, and to security and stability in the region.

This came in a symposium organized by the Yemeni Al-Minbar Center for Studies and Media via the electronic platform (Zoom) on the evening of Wednesday, Rabi` Al-Awwal 21, 1443 AH, corresponding to October 27, 2021 AD, under the title: The Houthis and the executions are a history of bloodshed.

Sheikh Abdullah Al-Nahidi, a member of the Communication with Yemeni Scholars Program, began by mentioning the creedal heritage of the Houthi militia, stressing that the transgression’s blood and money is permissible with a takfiri background and the claims of the offender’s apostasy and infidelity are found in the Houthis’ inheritance, beliefs and fatwas, indicating that the easiest thing for the Houthis is the permissibility of blood and killing, and the evidence for this is the arrival of The number of Yemeni victims in their sedition today is more than a quarter of a million.

Sheikh Al-Nahidi reviewed forms of Houthi audacity to kill, describing the crimes committed by the Houthis as being outside the scope of laws, customs, human nature, reason and logic.

For his part, lawyer and human rights defender Abdul Rahman Berman, president of the American Center for Justice, spokeACJ) on the issue of the execution of the nine Tuhami, explaining that before the Houthis executed the Tuhamian nine, everyone thought it was just a threat, stressing that the judges who issued the death sentence did not do it according to judicial procedures, but rather under the militia’s directives, as there were no judicial procedures as usual in the Yemeni judiciary. .

Berman explained that the victims were not allowed their families to visit them or allow lawyers to sit with them or to be visited by anyone, criticizing the international reactions to the heinous executions of the Tuhami, describing them as not being on the level of the crime committed by the Houthis, even the condemnation of the United Nations was not as it should and there are organizations The International did not have a clear position in condemning the crime.

Lawyer Berman denounced the position of the civil soft wing of Al-Houthi (organizations), which was rejecting the judicial rulings that were previously issued against some of the Houthi elements that were judicially convicted during the six wars in Saada between the state and the Houthi rebels, and they oppose those rulings and carry out protests and marches against them, and today these organizations have no A position against the death sentences against the sons of Tihama, according to him.

For his part, journalist writer Adel Al-Ahmadi, head of the Nashwan Al-Hamiri Center for Studies and Media, explained that the Houthi movement is a mass execution of identity and human beings, whether from its followers or from others. The Houthi Militia So far, the world is still ignorant of the Houthi militia and the Yemeni situation.

In addition, human rights activist Saffron Zayed criticized those who call the Houthi militia a political group or party, stressing that it does not apply to the Houthi dynastic sectarian militia. Zafran mentioned in her intervention that the Houthi militia put journalists and politicians in the range of missiles and ammunition stores as human shields, which is a heinous crime. Against humanity, she explained that the Houthi militia has made the judiciary a tool for killing.

Yesterday, Wednesday, the Iranian-backed Houthi rebel and terrorist militia raided a Salafist center in the center of the capital, Sanaa, ... 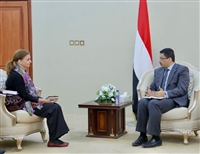 Educational and governmental sources who spoke to Al-Asima Online revealed the secret of the impossible questions and the intended errors ...