The local authorities in the Amanat Al Asimah, Al Hodeidah, Al Mahwit, Ibb, Dhamar, Raymah, Hajjah, Saada and Amran condemned in the strongest terms the horrific massacre committed by the Houthi criminal militia yesterday against civilians in the city of Marib.

In a joint statement issued today, the local authorities in the nine governorates renewed their demands to the international community, led by the United States, to reclassify the criminal Houthi militia as a terrorist organization, to include its leaders in the lists of global terrorism, and to start the procedures for prosecuting them before the International Criminal Court and prosecuting them as war criminals for all their horrific crimes against civilians and the displaced. In the city of Marib, the most recent of which was the bombing of the homes of innocent displaced persons in the Rawda neighborhood of the city of Marib with three ballistic missiles, which resulted in 35 martyrs and wounded, most of them women and children.

The nine governorates called on the UN Security Council, the United Nations, and human rights organizations and bodies to assume their humanitarian, moral and legal responsibilities towards innocent civilians, especially women and children who are subjected to genocide by the Houthi criminal and rebellion militias with Iranian weapons on a daily basis.

9 Al-Sahwa Net Al-Sahwa Net news website Civilians Houthi in a Local Marib .. Provinces Right the authorities the awakening the massacre To whom you owe 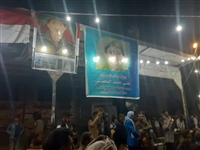 Al-Seddah District, east of Ibb Governorate, the birthplace of the hero martyr Ali Abdul-Mughni, celebrated the 59th anniversary of the ...

The Governor of Ma’rib, Major General Sultan Al-Arada, chaired today a security meeting of the provincial police command to discuss ...

The Minister of Information, Culture and Tourism Muammar Al-Eryani said, “The attack attempt was thwarted terrorist Planned by the Houthi ...