Top Stories Majali: The army and resistance forces broke the Houthi attacks and regained a number of sites in Al-Mashjah

Majali: The army and resistance forces broke the Houthi attacks and regained a number of sites in Al-Mashjah

The official spokesman of the armed forces, Brigadier General Abdo Majali, confirmed that the heroes of the National Army and the popular resistance continue their heroic battles, and broke the enemy despite his repeated attempts along the western, southern, and northwestern outskirts of Marib.

Brigadier-General Majali said in a statement to the army website, “SepNet” today, Monday, “There is no truth to what was reported by the French Press Agency, expressing his regret that it came in line with what the Houthi terrorist militia is spreading, and its supporter, Iran, which is trying to harm the Yemeni people, and claims falsely. Progress in the Marib Governorate ”.

He added, “The French News Agency made a big mistake while it was reporting false news from sources for the Houthi militia, and the battles are most intense, so it only achieves what the militia seeks in terms of psychological warfare aimed at exploiting the international media that has fallen into its traps and lies in good faith and in bad faith.” .

The Brigadier General called on the French Agency and other media to take the news and verify it from its real sources, represented by the army’s media and its official spokesperson.

He stated that the catastrophic errors in such news affect only its publisher and its credibility, stressing that the governorate of Ma’rib is far from Iran’s ambitions and dreams, whether through its terrorist militia, or the media that it is working to anesthetize, to deviate from its human goal, to convey the truth as it is. It is without any increase or decrease.

Brigadier General Majali said that the army continues to make victories, and that the battles it is fighting with the Houthi militia are still on the sites and fronts where the battles raged, following the recent military escalation of the militia at the beginning of last February.

He added that the past hours, the army forces made great progress and defeated the Houthi militia, in the Al-Mashjah front, in Al-Kasara, Hailan, Al-Mukhdarah, and other fronts, with the active and influential participation of the fighters of the Coalition to Support Legitimacy, which carried out the court raids on the militia’s elements, mechanisms and gatherings.

The official spokesman of the armed forces assured the Yemeni people everywhere, even in the areas that are still under the yoke of the militia, that there is no concern for Marib as long as there is the National Army under its leadership and its officers and its brave officers and personnel, the men and heroes of the popular resistance, and the Marib tribes. And courage, they are able to eliminate the militia and rid them of what they are in, by supporting the Arab coalition, led by the sisterly Kingdom of Saudi Arabia. 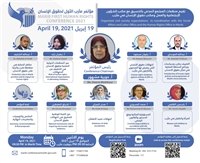 The launch event of the first Marib Conference for Human Rights will be launched next Monday, April 19, 2021, under ...

Muammar Al-Eryani, Minister of Information, Culture and Tourism, condemned the Iranian-backed Houthi militia’s targeting of communications towers of Sabafon and ... 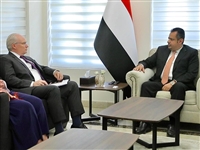 Prime Minister Dr. Maeen Abdul-Malik received today, the US special envoy to Yemen Tim Lenderking, where they discussed the continuation ...