Top Stories Major General Bin Abboud inspects the front lines of the Serwah front, and praises the heroics of the army and the resistance

Major General Bin Abboud inspects the front lines of the Serwah front, and praises the heroics of the army and the resistance

The First Undersecretary of the Ministry of Interior, Major General Muhammad Salem bin Abboud, inspected today, Saturday, the heroes stationed on the front lines at the Serwah front, west of the Ma’rib governorate, from the members of the National Army, security units and the popular resistance.

Major General Bin Abboud from the Front Command listened to a detailed presentation on the progress of the combat operations in the front … praising the readiness and high alertness of the heroes, which thwarted the terrorist Houthi militia’s plans and broke their thorns.

He said that the terrorist Houthi militia suffered crushing and great losses at the hands of the heroes of the army and the resistance, who presented a national and historical epic, which history will record in its brightest pages and study it for future generations.

Major General Bin Abboud praised the great popular and official rallying behind the heroes, who are fighting the battle of dignity and freedom against the rogue Houthi criminal gang, which has come to live its last moments.

The Undersecretary of the Ministry of Interior expressed his sincere thanks for the great and effective role played by the Arab coalition fighters led by the Kingdom of Saudi Arabia, in targeting the military reinforcements of the militia on various fronts.

Major General Bin Abboud said that the governorate of Ma’rib is protected by the determination and courage of the heroes, who are controlling the most wonderful heroic and timeless epics in the battle to restore the state and its various institutions from the grip of the terrorist Houthi militia.

The Minister of Information, Culture and Tourism, Muammar Al-Iryani, said that the practices of the Iranian-backed Houthi militia against the ... 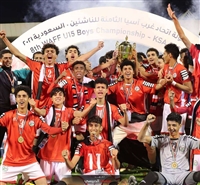 The entire Yemeni people exploded with joy from one end to the other, as soon as the whistle of the ...