A large crowd of civilians and military personnel, today, Saturday noon, the body of the martyr Brigadier General Muhammad Hussein Ali Munasir Al-Hamiqani, the technical corner of the 117 infantry brigade, in the seventh military region, to his final resting place in the martyrs cemetery in Marib.

During the funeral ceremonies, the commander of the 117th Infantry Brigade, Brigadier General Ahmed Hussein al-Naqh, praised the virtues of the martyr and his heroic roles, noting that with the departure of the martyr al-Hamiqani, Yemen and the national army and one of his loyal heroic men who wrote the most amazing epics on various fronts were lost.

Brigadier General Al-Naqah added: “Brigadier General Muhammad Hussein Al-Hamiqani was one of the first men who answered the call of duty from the first moment of the Houthi coup against legitimacy, and joined the ranks of the National Army, setting the finest examples of honesty, loyalty and constancy, armed with morals and virtues.

The family of the martyr and his loved ones affirmed their steadfast position and their permanent adherence to the constitutional legitimacy, stressing that they would continue to move forward in the path of the martyrs and stand before the Houthi coup militia, which wreaked havoc on the land, whatever the sacrifices were until the liberation of every inch of the homeland was completed.

For their part, the mourners praised the virtues of the martyr and the sacrifices of his family and his great tribe, the Al Hamiqan tribe in Al-Bayda governorate, which offered hundreds of martyrs on various battle fronts and wrote the most amazing heroic epics, while they were defending the revolution and the republic against this coup militia.

The funeral was attended by the leadership of the Al-Bayda Axis, a number of military and security leaders, leaders of the local authority in Al-Bayda governorate, and a large crowd of citizens.

Alhumaimani And my people Dean For a corpse Funeral Marib .. martyr Official Sahwa Net Sahwa Net news site the awakening To whom 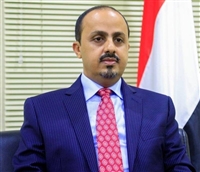 The Minister of Information, Culture and Tourism, Muammar Al-Eryani, confirmed that the Yemeni-Yemeni consultations, which were held in the Saudi ...

The Executive Director of the United Nations Environment Program, Inger Andersen, said, “The Houthi coup militia has not given any ...

The report issued by the Executive Unit for the Management of IDPs Camps in Marib showed that the number of ...