Local sources in Dhamar Governorate reported that the militia cemeteries in the governorate are becoming narrower with the number of the group’s dead, whom it has recruited from the same governorate, while the militias are still launching campaigns to search for new recruits to bring them to the fighting fronts.

According to a local official loyal to the legitimate government in Dhamar, the militias have lost more than 6,000 of their members belonging to the province, which is one of the provinces that the group bets on to supply its fronts with fighters.

The Deputy Director of the Culture Office in Dhamar, Ali Abu Howaida, stated that more than 6,000 recruits in the ranks of the Houthi coup plotters from Dhamar were killed in battles with the Yemeni army forces during 2021.

Howaida said, through a series of tweets on his Twitter account, that the disappearance of 25 children in the city of Dhamar during the same year was recorded, in addition to 20 civilians who were killed by the group’s gunmen in the same governorate.

In the same context, the local official revealed that the coup militias looted during the past periods of more than 3 billion riyals from the money of citizens and merchants in the governorate and its various villages and districts, according to the justifications for holding events and supporting the war effort (the dollar is about 600 riyals).

According to local sources in Dhamar, the governorate under the control of the militias is still considered by the group’s leaders among the important governorates with human resources to strengthen and support their various fighting fronts.

The sources pointed out that the group has, over the past years, waged hundreds of forced recruitment campaigns among the residents of the governorate of different ages, with the aim of dragging them, successively, into the fight.

The sources pointed out that the latest statistic is only a small part of the number of actual dead and wounded who fell during the past years and are still falling, successively, on various fronts.

Despite these high numbers of deaths, the Houthi campaigns of mobilization, polarization, and mobilization are still continuing in various regions of the governorate to supplement the group’s fronts in Marib, Shabwa, Al-Jawf, the western coast and others.

Meanwhile, a local source in Dhamar revealed to Asharq Al-Awsat that the governorate’s cemeteries, which were built by the militias in earlier times, are no longer capable of accommodating the group’s dead at the present time.

According to the source’s assurances, dozens of corpses of Houthi elements arrived during the past two days to the center of the city of Dhamar, after they were killed on the Ma’rib and Shabwa fronts.

The source, who asked not to be named, said that more than 27 bodies of the dead Houthis belonging to separate areas in Dhamar arrived in the past two days to the city’s hospitals, and some of them were distributed to Dhamar General Hospital and other hospitals in the city.

He pointed out that there is no longer a village, no isolation, or a city in Dhamar governorate that has not forced people to pay for the sake of defending the group and its destructive project.

The group had previously admitted, in late December, through the group’s leader, Fadel al-Sharqi, nicknamed “Abu Aqil” and appointed general supervisor of the governorate, that about 9,000 Houthi gunmen had been killed during the past years, belonging to Dhamar.

The coup supervisor, one of the students of the group’s founder, Hussein al-Houthi, announced in a previous tweet on Twitter that the governorate’s giving will not run out and the funeral processions will not stop. In reference to the militias’ continuing to deceive the remaining residents of Dhamar, with the aim of sending more of them as fuel for the fronts.

Activists from Dhamar expressed their mockery of what was mentioned in the tweets of the Houthi supervisor, when he expressed his bragging that the Dhamar governorate celebrates the joy and glee of the killing of 9 thousand of the people of this governorate.

The leader of the militia, Muhammad al-Bakhiti, the impersonator of Dhamar Governorate, had confessed early last year through his statements broadcast at the time through Houthi media, with the death of more than 5,400 Houthi members belonging to the same governorate. 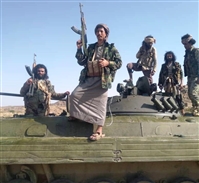 The army and resistance forces continue their military operations in Al-Bayda governorate, amid rapid advances in a number of areas ...

The body of the hero martyr, Brigadier General Hilal Hassan Mushabab al-Khalidi, commander of the 13th Brigade of the Border ...