Top Stories National Commission of Inquiry: 1,363 civilians, including women and children, were killed and wounded, during 2020

National Commission of Inquiry: 1,363 civilians, including women and children, were killed and wounded, during 2020 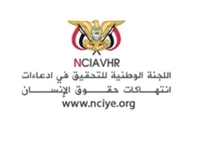 The National Commission to Investigate Allegations of Human Rights Violations confirmed that it monitored and investigated 2,901 incidents of abuse that occurred in various governorates, affecting 4,292 victims of both genders and of all ages, including 1,363 victims killed or injured as a result of targeting civilians during the past year 2020 AD.

The committee stated in a press statement about the work it has accomplished in the field of investigation and monitoring of violations during the year 2020 related to the human rights situation in Yemen, that it has monitored 404 cases of murder, including (56) women and (83) children and girl, and (751) wounded, including (103) It is noteworthy that the past year 2020 AD witnessed a significant increase in violations of civil, political, social, economic and social human rights, and many civilian victims were killed and injured.

The committee indicated in the statement that it recorded the fall of (232) victims of exploding mines and explosive devices, including (23) women and (44) children, and recorded (1052) incidents of arbitrary arrest and enforced disappearance, and targeting (39) archaeological and religious eyes, and a number (17) An attack on medical personnel and health facilities and facilities, the destruction of (757) public and private buildings, (17) schools for children, and monitoring of (118) incidents of recruitment of children under the age of 15 years.

The committee’s field team also documented the bombing of (30) houses in addition to the forced displacement of (310) citizens, monitoring and investigating (54) incidents of extrajudicial killings, during which the commission heard more than (8,703) informants and witnesses of various types of human rights violations that occurred. It occurred in the majority of provinces.

In the report published by Saba Agency, the committee noted that it carried out (12) field landing activities carried out by members of the committee to the directorates of Taiz, Lahj and Marib governorates to investigate the incidents of targeting residential neighborhoods and the fall of various projectiles, in addition to the almost daily disembarkation of field researchers in (18) governorates to conduct direct interviews. With the victims, their families and eyewitnesses, members and monitors of the committee carried out a number of visits to prisons and detention centers in Taiz, Marib, Aden, Shabwah and Lahj, and discussed with the leadership of the security authorities in these governorates some of the incidents that the committee is investigating.

The committee indicated that, during the year 2020, it held public and closed hearings with victims of arbitrary detention and torture, as well as children victims of the six grave violations, and carried out workshops with the neighborhoods of neighborhoods in contact areas to facilitate access to victims and verify the methodology of civilian harm, in addition to communication and cooperation with the community Civil society, especially organizations working in the field of protecting human rights for women and institutions affiliated with the National Federation of the Poorest.

The National Commission of Inquiry called on all parties to the conflict to comply with international humanitarian law and international human rights law, which includes the obligation to protect the lives, safety and dignity of all civilians without discrimination, and to ensure their access to resources and opportunities for a decent life.

The committee expressed its condemnation of all forms of violence against innocent women, men and children as a tool of war, as well as policies of oppression, arbitrary arrests and restrictions on freedoms.

Demanding the UN envoy to Yemen to play his role in condemning the violations committed against the citizens and placing the issue of human rights among the priorities of the peace agreements sponsored by the United Nations.

A Sheikh Qibli in one of the directorates of Ibb governorate was attacked and kidnapped by the Houthi coup militia. ...

Suhail satellite channel announced that it will resume broadcasting today, Thursday, at 4 pm, after the forced suspension of broadcasting ...

His friends call him Einstein, Yemen, and a lover of chemistry, and he wished to become a space scientist. He ...