Top Stories Officials: The Security Council resolution confirms the international community’s conviction of the danger of the terrorist Houthi militia

Officials: The Security Council resolution confirms the international community’s conviction of the danger of the terrorist Houthi militia

Security Council Resolution 2624BThe renewal of the sanctions regime in Yemen, which described the Houthi militia as a terrorist group, is widely welcomed at the local and Arab levels, as it represents an international consensus to condemn the terrorist Houthi militia, which has become a threat to security, not only at the local Yemeni level but also at the regional and international levels.

Yemenis have long demanded to put this terrorist group on the list of terrorism and to hold it accountable for its crimes against the Yemeni people, especially since the crimes it committed are war crimes with no statute of limitations.

Chief of Staff Lieutenant-General Saghir bin Aziz affirmed that Security Council Resolution 2624 carries many implications, foremost of which is the international community’s rejection of all types and names of terrorist acts, their justifications, and the fight against all elements of their survival.

Bin Aziz considered the Security Council’s move to adopt Resolution 2624 against the terrorist Houthi militia an advanced step, despite its delay.

Human Rights Minister Ahmed Arman stressed that “the classification of the Houthi militia as a terrorist group is based on the provisions of international laws and agreements that define acts and actions that constitute crimes of a terrorist nature and are classified as terrorist acts.”

Information Minister Muammar Al-Eryani affirmed that UN Security Council Resolution No. (2624) classifies Iran’s Houthi militia as a “terrorist group”, and condemns its cross-border attacks on civilians and civilian infrastructure in the Kingdom of Saudi Arabia and the UAE, describing it as “terrorist acts”, and listing it as an entity on the sanctions list. With the arms embargo, an important step in the right direction.

Noting that the support of (11) of the council members for the resolution, including the permanent members, confirms the conviction that has been established in the international community regarding the practices of the terrorist Houthi militia, and the international consensus to support a political solution based on the three references represented in the Gulf initiative and the outcomes of the Dialogue Conference, and the decisions of the Council Security.

Al-Eryani explained that the decision reflects the state of international consensus to reject the attempts of the terrorist Houthi militia to impose a fait accompli in Yemen or to control parts of it by force and terrorism, and the need to exert real pressure to stop its crimes and violations against civilians, and to threaten regional and international security and peace, and to engage in efforts to bring about peace.

And the Minister of Information, those involved with the Houthi terrorist militia, warned “entities, legal persons, and individuals”, whether they are in the areas under its control or abroad, of the legal consequences of this, and Al-Eryani called on those involved with the Houthi group to review their positions, and immediately stop supporting, dealing, and colluding with The world classifies a militia as a “terrorist group”

Dr. Mohamed Jumaih stressed that the new UN Security Council resolution from a diplomatic point of view is an achievement, but it will have no value unless there are strict mechanisms to implement its articles, especially with regard to arms smuggling.

Yahya Al-Thalaya, head of the General Book Authority, said: Al-Houthi has always insisted in an ugly and dirty way to present himself to the world and to international powers that he is qualified to be a hand and a tool to fight the Yemenis, whom he used and still calls (terrorists), but the world itself has branded them tonight in the same capacity (a terrorist group).

Pointing out that the Houthi militia, in its internal discourse, since the inception of this group, has been trying to present itself as an extension of heaven, revelation, dynasty, Imamate, guardian of religion and a watchdog even over consciences. Terror, genocide, destruction, devastation and corruption.

Al-Thalaya explained that the Houthi militia has been desperate in its public and hidden international discourse, and has tried desperately to present itself to the West and the East.

He stressed that the Houthi militia, after it was able to overthrow the Yemeni state, dropped the last husks of falsehood and misinformation, and appeared in its true form as one of the most dangerous crime and deviation groups that threaten local, regional and international security and peace. Security 2624 Al-Thalaya affirmed that the decision is a global consensus with all its leaders and institutions to characterize the Houthi militia as a terrorist group. 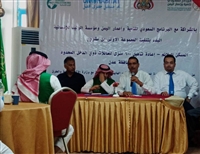 Today, Wednesday, June 15, 2022, the Saudi Program for the Development and Reconstruction of Yemen launched the process of starting ...

The Alliance of Youth Parties of Taiz Governorate condemned the assassination The political and patriotic fighter and the free fighter, ...

The head of the Supreme Commission for Islah, Muhammad bin Abdullah al-Yadoumi, sent a telegram of condolences and sympathy to ...