Top Stories On the authority of the Republican teacher, Qasim Ghaleb Al Rasooli … and restoring the national memory

On the authority of the Republican teacher, Qasim Ghaleb Al Rasooli … and restoring the national memory

Dr. Kamal Qassem Ghalib died yesterday, Thursday, in Cairo.. Personally, I do not know Dr. Kamal, even if one day I called him on the phone while I was in the process of researching the biography of his father, the scientist and revolutionary Qassem Ghalib, and unfortunately for my luck, the meeting did not take place..

Dr. Kamal’s friends and those who know him praise him and describe him as charitable, high humility, and fruitful giving, may God have mercy on him, and how not..

On the occasion of Dr. Kamal’s departure, it would be loyalty, and it is necessary to recall his father, who was the father and teacher of all the Yemeni people and who seemed to be a people with whom we acted with disobedience by ignoring his biography and many others like him.

Perhaps this disregard for the institutions of the revolution and the republic and their absence from the generations is not innocent, especially since the size of the systematic conspiracy against the republic and the revolution has been manifested from near and far, and it is natural here that the memory of the people and their symbols are the first to be targeted..

Whatever it is, it is a shame that this name is unknown in Yemen, and it is a shame that the people of Taiz and Yemen in general do not know who Qassem Ghaleb is, as the man from the constellation of the great leaders of Yemen who led the process of liberation and enlightenment and one of the first pioneers of the September 26 revolution.

He was imprisoned in the Imam’s prison for more than 12 years because of his scientific activities and his demand for development and the lifting of injustice towards people.

Upon his release from prison, he fled to Aden and from there he directed his first message forward in which he criticized injustice and demanded that he initiate change, develop education and support agriculture and production instead of ignorance and oppression of the people

Actively contribute to writing, rhetoric and teaching in order to deliver the people from the trinity of ignorance, poverty and disease, (Trinity) was a political program of the imamate, or more than that a nodal will.

Qasim Ghalib believed that education was the gateway to this salvation, so he worked to spread knowledge and establish schools and educational incubators in his struggle.

Professor Qasim Ghaleb was one of the close associates of the scholar of Al-Jazeera, Muhammad bin Salem Al-Bayhani, and together they fought ignorance in the mosques and schools of Aden.

He studied in many institutes and schools of Aden as the owner of a revolutionary project and a national message.

He contributed with Al-Bayhani to found the famous Al-Noor Institute in Aden, as well as founding other schools and was associated with it. Close links with the leaders of the revolution and the pioneers of liberation, including the Sheikh of the Yemeni Liberals, Abdullah al-Hakimi.

After the September 26 revolution, he returned to Taiz, and as usual, he turned to the activity of education, education and awareness. During this period, he established the Islamic Center in Taiz, which handed over its management to the student returning from Cairo, Abd Muhammad al-Mikhlafi, who saw in him a student of its prophet and an able and distinguished leader.

For his role in the revolution process and his scholarly position, Qassem Ghaleb was appointed Minister of Education after the revolution, and he was one of the first to establish education in the Republic and deserved the title of father of education.

Qassem Ghaleb, from Taiz (city) His first studies were in Zabid when Zabid was a beacon of science and the castle of scholars.

Today no one knows who Qassem Ghaleb is, and if he was in another country, we would have seen his name and his biography in the school curriculum as a model and a picture of national loyalty, or perhaps his statue was erected in the major schools of the republic.

To pay homage to education, to commemorate his scientific struggle, and to motivate generations to acquire and develop science.

We do not have a national archive and our national memory is unfortunately pierced, It is one of the weaknesses that afflicted the republican system, its state, and its values.

Today we are fighting the battle of the second republic and the most important epic to confront myth, ignorance and racial superiority for the sake of the people’s freedom, topple the nightmare of the dynastic imamate, and to dissolve the restrictions and rules of tyranny through the general popular mobilization behind the national army on all battle fronts., It is necessary to reconsider the struggles of the fathers politically, culturally, technically and scientifically, and to stand up to the legacy of September and the symbols of the Republic, We also have a duty to document the epics of the people yesterday and today.

We must indeed work to restore memory, but rather to establish a healthy and healthy container for the national memory and Yemeni history.

This is so that the people’s struggle does not go to waste, and in order to build on the accumulation of struggle and sacrifices a nation immune from epidemics penetration and infiltration Hatchet Destroyed historical from the doors The background and the gates open to the red wind, the Marshes, and the homeland thieves.

God bless the professor The leader and teacher Qassem Ghaleb, may God have mercy on his son, Dr. Kamal Qasim Ghalib, who died in silence and a lump. A lump every Yemeni carries today.

The Council of Ministers, in its session held in the temporary capital, Aden, headed by Dr. Moeen Abdul-Malik, saluted the ... 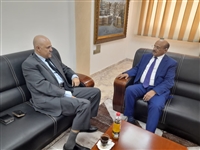