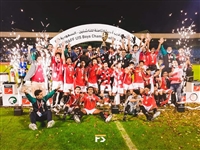 Our national junior team received the West Asian Junior Championships Cup in its eighth edition, after defeating the Saudi team by five goals to four.

The Minister of Youth, Nayef Al-Bakri, participated in the crowning of our team with the championship cup and gold medals, in a ceremony held by the Federation at Prince Muhammad bin Fahd Stadium in Dammam this evening.

The players and the technical staff expressed their overwhelming happiness with this historic achievement, which made millions of Yemenis happy at home and abroad, and they gifted the cup to the Yemeni audience, who was supportive and supportive of them.

The coach of the national team, Captain Qais Saleh, said that the young stars of the national team achieved the miracle, conquered the impossible, overcame the challenges and succeeded in presenting an honorable image of Yemen and winning the cup for the first time in history. The Saudi national team was a strong match for our team, and presented a wonderful level that deserves appreciation and respect.

Joy filled the streets of Yemeni cities, which allocated many of their squares to watch the match, after which thousands of Yemenis celebrated this historic achievement of Yemen, chanting national songs and chants, firing fireworks and car horns in the streets, ululating in homes and waving the national flag.

On Monday, the Popular Authority to Support the Defense of Marib conducted three food convoys for the heroes of the ...

The Minister of Health and Population, Dr. Qassem Bahibeh, discussed in the temporary capital Aden today, with the representative of ...

The capital, Sanaa, is experiencing a suffocating crisis in domestic gas, as the price of a cylinder reached 14,000 riyals ...