In the past two weeks, the Houthi militias have mobilized their senior leaders and supervisors in five Yemeni governorates to launch new recruitment campaigns to compensate their dead and wounded members in the battles of Marib and Shabwa. However, their efforts were met with popular reluctance and tribal disregard, according to informed sources told Asharq Al-Awsat.

As a result of the successive human losses incurred by the group and still on the Ma’rib fronts at the hands of the giants forces and the national army backed by the coalition’s aviation that supports legitimacy, the sources stated that the group launched during the past two weeks, through its supervisors and followers, new recruitment campaigns among civilians and children in the capital Sana’a and its countryside and Raymah governorates. Ibb and Dhamar.

The sources told Asharq Al-Awsat that the widespread rejection among the residents of Sanaa, the capital, of the Houthi death and destruction project, and their reluctance to respond to calls for mobilization and mobilization in their ranks, frustrated the militia leaders, which prompted some of their leaders to resort again to the begging of some tribal sheikhs, in An effort to intervene to save their fronts after tempting them with money and positions.

According to the same sources, the group has failed to attract any new recruits in most of the capital’s neighborhoods and directorates, and in villages and isolated areas of Sana’a countryside, within more than a week since the start of the new campaign that the group had directed to implement to mobilize to the fronts.

The sources indicated that the militia leaders in Sana’a were angry after receiving information about the failure of recruitment operations in most of the areas under their control, which made them issue urgent circulars urging their security leaders to quickly hold the supervisors and leaders responsible for the funds allocated to the mobilization and mobilization accountable after their failure.

At a time when the coup group still suffers from a great inability to include new fighters in its ranks with its abject failure to persuade tribesmen to support it with fighters in order to save its crumbling fronts, local sources in Raymah governorate told Asharq Al-Awsat that the group failed to mobilize the people of the country. The villages and districts of Al-Jubeen and Bilad Al-Ta’im districts in Raymah were isolated to their tactical stands and then mobilized to the fighting fronts.

The sources in Raymah confirmed that the group’s followers tried in the middle of last week to use all means of pressure and intimidation against the people of those areas in order to mobilize them to the sit-ins and then the fronts, but they were all met with widespread rejection.

In the governorates of Dhamar and Ibb, local sources told Asharq Al-Awsat that the mobilization operations carried out by the militias during the past days in several districts were also met with widespread rejection and resentment by the people of those areas, especially after many of them realized that their children and relatives who had been driven by the group Previously to the fronts, they returned to them as lifeless bodies, while the group left their families and children to struggle with hunger without even paying attention to their suffering and their demands for living.

The sources pointed out that the disappointments suffered by the group in this mobilization process led to igniting sharp disputes between the senior militia leaders in the two governorates and their supervisors who are responsible for the campaigns of polarization and recruitment in some directorates, villages and isolation, where there were intertwined accusations of treason, inaction and the theft of funds allocated to lure recruits.

Over the past few months, the militias launched dozens of mobilization campaigns to their squares in the cities and villages under their control, in order to achieve any progress on some combat fronts, especially those in which they received large human and material losses.

In the past, the militias resorted to pushing their women’s security known as “Zeinabiyat” to take over the task of attracting and recruiting children in various ways, including enticing and intimidating their mothers in Sanaa and other areas under the control of the coup, according to local sources who spoke earlier to Asharq Al-Awsat.

Residents in the targeted areas warned of the consequences of the Houthi militia’s current activities to attract children and young people in their areas of control, brainwash them with sectarian and extremist ideas, and then send them as fuel for their various military operations.

According to the sources, the Houthi militias, through these practices, most of which were accompanied by violence, confiscation of rights and depriving children of the right to education and life, sought to incite child soldiers to murder, violence and sectarianism, and later use them as fuel for the group’s battles.

The Security Committee in Shabwa Governorate said in a statement, “The Transitional Council continues its desperate attempts to drag Shabwa ... 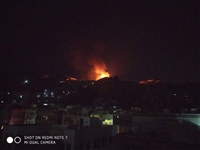