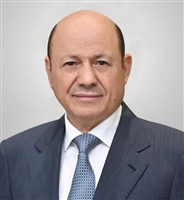 Today, Monday, the Chairman of the Leadership Council, Dr. Rashad Muhammad Al-Alimi, headed to the State of Kuwait at the beginning of a foreign tour focusing on bilateral relations with a number of brotherly countries, developments in the Yemeni situation and ways to mobilize support for the ongoing reforms in the country.

The President is accompanied by Rashad Al-Alimi, Member of the Leadership Council, Faraj Al-Bahsani, and a high-level government delegation that includes the Ministers of Foreign Affairs, Dr. Zubat wedding.

The Chairman of the Leadership Council and his accompanying delegation will meet with the leaders of sisterly countries to discuss the priorities of the required support for the Yemeni economy, efforts to restore the state, and establish peace and stability in Yemen.

A media source at the Presidency of the Republic said in a statement to Saba Agency, “The new presidential tour comes within the framework of consultations with the brothers in the GCC countries on common security challenges, and developments in the Gulf, international and international efforts to bring peace and stability to Yemen, with the Houthi militia’s continued intransigence towards it.”

The source valued the generous support of the State of Kuwait within the coalition to support legitimacy, led by the Kingdom of Saudi Arabia and the United Arab Emirates, and its steadfast support for the Yemeni people and its political leadership in various stages, leading to its distinguished role during the years of war ignited by the Houthi militia backed by the Iranian regime.

The Ministry of Foreign Affairs and Expatriate Affairs said, “The terrorist attack with ballistic missiles and drones explosives launched by ...

The Medical and Technical Reception Committee for the returnees from India has completed its work, after completing the evacuation plan ...

The Yemeni detainees who were released in prisoner exchange deals recount horrific facts about the types of torture they are ...