Top Stories President Hadi Griffiths: We look forward to concrete action on the ground that ends the suffering of our people

President Hadi Griffiths: We look forward to concrete action on the ground that ends the suffering of our people

In the meeting, the President renewed our country’s permanent stance towards peace as it is our choice and the approach of our people who are eager for security, stability and harmony .. Pointing to the total concessions made by the legitimate government for this purpose, which unfortunately were met only with arrogance, intransigence and the rebellion of the coup militias against all agreements and understandings as it is in the past and works with all Clarity on transferring the Iranian experience to Yemen, which our Yemeni people will not accept and will not accept at all, regardless of the sacrifices that it costs.

The President affirmed his permanent support for the efforts of the United Nations to establish peace in Yemen in accordance with the references and resolutions of international legitimacy, foremost of which is Resolution 2216.

He added, “In this context, we affirmed our support for the work of the UN envoy Martin Griffiths to move towards achieving the desired peace goals and aspirations based on the three references, but the results on the ground since the Stockholm Agreement clearly indicate the Houthis’ indifference or eagerness to implement its provisions and even exceed its timeframe.”

President Hadi said, “We are looking forward to concrete work on the ground, away from media work that mixes papers without achieving tangible results and creates frustration on the Yemeni street, as is the case with regard to the prisoner exchange file.”

He pointed out that the Yemenis aspire to end the war and achieve the just peace that the Yemeni people deserve, and regional and international references have confirmed it.

For his part, the UN envoy, Martin Griffiths, appreciated the president’s enduring efforts towards peace and his unlimited support in pushing forward and the success of all efforts and consultations aimed at achieving peace, including files for the release and exchange of prisoners in coordination with the Red Cross.

He said, “The international community closely monitors the situation in Yemen in general and appreciates the efforts of His Excellency the President in this regard,” stressing his efforts and continuing his efforts to achieve the peace that the Yemeni people deserve.

Action Earth Finishes Hadi looking forward On Our people President Sahwa Net Sahwa Net news site suffering tangible the awakening To Griffiths: to me To whom

In conjunction with the escalation of a terrorist attack targeting vital Saudi civilian facilities, militia leader Abdul-Malik al-Houthi went out ... 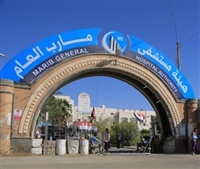 During the past three days, the Ma’rib General Hospital Authority performed 10 eye corneal transplants for the first time in ...

The Minister of Defense, Lieutenant-General Muhammad Al-Maqdashi, inspected today the Basheeb Military Hospital in the interim capital, Aden, and was ...