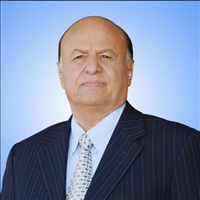 The President of the Republic, Abd Rabbuh Mansour Hadi, praised the victories achieved by the heroes of the National Army in various locations and fronts of glory and dignity in the face of the forces of rebellion and coup of the Iranian Houthi militia towards our people, our homeland and our identity. and their identity.

Hadi made a phone call to the Minister of Defense, Lieutenant-General Muhammad Al-Maqdashi, to learn about the developments in the field conditions and the military operations that the heroes of the National Army are waging in various locations and fronts.

The President stressed that the great sacrifices of the heroes of the military establishment that culminate in successive victories over the Iranian militias that mobilize all means of death, killing and destruction towards the innocent and displaced in Marib and various other provinces will always be doomed to defeat and failure. Modern federalism based on justice, equality and good governance.

The President valued the support and support of the brothers in the Alliance to Support Legitimacy, led by the sisterly Kingdom of Saudi Arabia, and the active participation of the brothers in the United Arab Emirates for the process of liberating Yemen from the domination of the coup militias by providing support to the heroes of the National Army and the Resistance.. He affirmed the appreciation of the Yemenis and its legitimate leaders for this support in order to restore Legitimacy and state institutions and the protection of Yemeni identity from the schemes of the Iranian project.

For his part, the Minister of Defense presented the President with a report on the progress of the military operations achieved by the National Army, which culminated in the liberation of a number of areas on a number of fronts… stressing that the morale of the army personnel is high on various fronts.

A report issued by the Yemeni Teachers Syndicate revealed that 1,580 teachers and educators were killed in areas controlled by ...

A woman was killed and another was injured in Ibb governorate, central Yemen, as a result of a dispute over ...

The Minister of Information, Culture and Tourism, Muammar Al-Eryani, reassured the health of the wounded in the terrorist act that ...