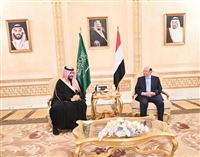 According to “Saba” agency, the meeting dealt with a number of issues and topics of common interest.

The President welcomed the Deputy Minister of Defense of the Kingdom of Saudi Arabia..emphasizing the distinguished fraternal relations between the two countries and the two brotherly peoples and the prospects of strengthening and developing them..reaffirming the unity of the goal and a common destiny in facing challenges in various situations and circumstances.

The President, the Saudi Deputy Minister of Defense, conveyed his greetings and gratitude to his brother, the Custodian of the Two Holy Mosques, King Salman bin Abdulaziz Al Saud, and his trusted Crown Prince, Deputy Prime Minister and Minister of Defense, His Royal Highness Prince Muhammad bin Salman bin Abdulaziz.. pointing to the permanent strategic brotherly consensus between Yemen and the Kingdom. Towards crucial issues in the face of Iranian expansion and support for Yemen, its legitimacy, unity, security and stability.

For his part, the Saudi Deputy Defense Minister, His Royal Highness Prince Khalid bin Salman bin Abdulaziz, expressed his pleasure at this reception and meeting.. He conveyed to the President the greetings of his brother, the Custodian of the Two Holy Mosques King Salman bin Abdulaziz Al Saud, and his Crown Prince, Prince Muhammad bin Salman.

The Saudi Deputy Minister of Defense affirmed the Kingdom’s supportive position for Yemen and the commitment of the coalition led by the Kingdom to support the Yemeni government and people, and to continue efforts to reach a peaceful solution based on the three references, that meets the aspirations of the brotherly Yemeni people and preserves the security of the region.. once again the Kingdom’s permanent position in support of Yemeni legitimacy To confront the rebellion and coup of the Iranian-backed Houthi militia, and to preserve the unity, security and stability of Yemen.

His Royal Highness Prince Khalid bin Salman noted the Kingdom’s permanent support for Yemen on all tracks, including the service and economic aspects.. He congratulated the recent decisions related to reforms in the Central Bank of Yemen, which contribute to improving the financial situation of Yemen, which encourages an increase in economic support from the Kingdom and the international community. .

A gunman killed his father and brother, and wounded his mother and sister, in a crime considered the fifth of ...

Today, the Establishments and Personal Protection Police in Ma’rib governorate celebrated the graduation of the seventh batch of innovation (the ...

A number of military leaders confirmed that the martyrdom of Commander Lieutenant-General Nasser Al-Thibani ignited the victories achieved by the ...