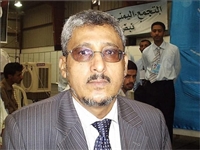 Professor Ali Al-Wafi passed away to his Lord, he passed away, and he is faithful to his principles. He left Al-Wafi, and his morals, patriotism, integrity, virtues and his fragrant life remained. He left, may God have mercy on him, lightly, as he left behind nothing but good reputation, self-esteem and clean hand. The well-known parliamentary and economist left to his Lord after a life full of giving.

Dr. Muhammad al-Afandi, head of the economic department in the Islah party, said: My brother, companion of Derby and my dear friend, the Honorable Ali Muhammad Al-Wafi, he moved to the mercy of God this day in Hyderabad, India, after his illness became severe. The honest economist, one of the pioneers of the founders of Islamic banks, a fighter for rights

Economic, social and political freedoms in the House of Representatives. He is a humble man who strives to serve people and society. He was a supporter of the oppressed and an opponent of injustice, tyranny and backwardness.

Shawqi Al-Qadi, a member of the House of Representatives, mourned his colleague and friend by saying: You and I will stay with us, like a shadow for six years. Its teachers, and I will miss you, teacher, when I need someone to send it to me, and consult him in my affairs, and discuss with him the concerns of our homeland, which are painful by your departure, after it has been proven to me that you are the deepest analysis and the farthest vision in looking at the outcomes of Yemen’s situation.

Ali Al-Jaradi, head of Al-Islah media, said: He knew about Al-Wafi, may God have mercy on him, his principled stances, integrity, chastity and humility.

He adds: He suffered a lot from illness in his last years with patience and calculation until he passed away in India.

Nabil Al-Bukairi pointed out that he knew Mr. Ali Al-Wafi from an early age and in the purest image of the human being, with knowledge, humility, asceticism, nobility and a national responsibility that he fought in his short career and performed his best performance and responsibility.

Al-Bakiri added that Diwan Al-Wafi was full of elite echoes close to him and from whom we learned a lot.

Al-Bukairi said, “Here is the professor Al-Wafi today leaving us to his Lord after a long struggle with illness.”

Al-Bukairi confirmed that Professor Ali was a national school in economics, patriotism, integrity, asceticism and modesty, all of this was embodied in it, and he who lived as a fugitive from the lights and reluctant to attend any public good for the people and the homeland.

Al-Bakiri added: He was a school in Al-Wataniya in every sense of this word, and he was the one who transmitted in his youth and passed through partisan experiences in search of a path for national political action, so he started his political life as an activist in the nationalist movement as a Nasserite and then moved to the ranks of the Islamic movement. He studied economics in Pakistan, and he was the one who went to study medicine.

He adds: He went through the experience of public work as a member of the House of Representatives in 1993 AD and as an economic advisor to some private institutions, in addition to his own work, in which he suffered a lot and went through an investment experience through which he faced corruption and corruption, which ended his private project in the courts.

Al-Bakiri says: Today Professor Ali passed away and his soul flooded to his innocent in India, who went to her for cancer treatment while he was displaced from his family and his country, who gave him a lot and despite all that he was and still blames himself a lot that he is short and that he did not provide anything according to my constant talk and my long discussions with him God rest his soul.

He added, “He served the country as an economist and expert who did not shed dust, a mature parliamentarian and an expert who enriched parliamentary life with his political and economic experience.

“He went to India, his last stop to receive treatment in accordance with his capabilities. My last meeting with him was more than two months ago, I embezzled him while releasing the Saberin Al-Mohtasebeen regret, coupled with expressions of praise and praise to his master.”

He added, “Two days ago, I was listening to a poem from his colleague and lover, Dr. Abdul Majeed Al-Mikhlafi, of a poem he wrote with the blood of the heart, relishing with love and sincere supplication for him to heal The consolation of everyone who knew this man was that he met his Lord during these blessed days, as one of those lining up with this great divine gift.

Abdul Rahman Berman said, may God have mercy on him, the professor Al-Wafi lived the life of honest fighters who love their country with a clean hand, heart, good morals, and a model to be emulated.

Tawfiq Al-Hamidi said: Although my communication with him was limited, before he traveled, I contacted him to consult him on a topic. After the conversation, his last words to me were, I am traveling for treatment, your invitations to me, and upon return we will meet in Istanbul.

Ali Al Wafi, an economist, lived true to the values ​​of integrity, and was an exceptional role model in his life. Everyone who approached him knows this very well.

Al Wafi .. Ali And asceticism And humility And integrity at Economy Patriotism Sahwa Net Sahwa Net news site School the awakening the professor To whom

On Monday, the first conference for human rights was held in Marib Governorate, with wide participation of human rights activists ...

In recent weeks, the phenomenon of kidnapping children and girls in Ibb Governorate (central Yemen) has escalated in recent months ...

UNICEF praised the level of cooperation of the official authorities in Marib with the organization and the facilitation of the ...