Top Stories Psychological torture: Journalists in Houthi prisons are deprived of the last farewell to their parents

Psychological torture: Journalists in Houthi prisons are deprived of the last farewell to their parents 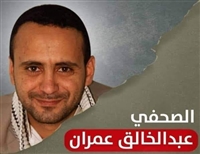 The kidnapped journalist Abdul-Khaleq Omran was not the first journalist to be deprived of the last look at his father, but was preceded by other colleagues.

Colleague Omran, who has been in Houthi prisons for six years because of his journalistic work, was subjected to physical torture by members of the Houthi militia, which issued a decision to execute him along with other of his colleagues.

Sheikh Ahmed Imran has gone to his Lord, while his son is still in prison, waiting with his colleagues for the sun to shine on freedom and the curtain to come down on years of imprisonment, injustice, torture and deprivation.

Hadi Haig, a member of the Shura Council and head of the Prisoners and Detainees Foundation, said: “My condolences to the hero of the pen and the prisoner of showing the truth, the struggling journalist Abdul-Khaleq Omran, in the death of his father as a grief for him.”

Hague called on the UN envoy to take his responsibility seriously in releasing journalists and prisoners of conscience so that he would not be complicit in his failure to unjustly stay behind bars, urging the Security Council and the international community to shoulder their responsibilities.

Journalist Hisham Tarmoum, one of the journalists released from the prisons of the Houthi militia in a prisoner exchange deal after five years of imprisonment and torture, demanded an end to the suffering of journalist Abdel-Khaleq and the rest of his colleagues in Houthi prisons, and called on the international community and human rights organizations to pressure the Houthi militia to release his kidnapped colleagues and end years From the cumulative and serial suffering and enforced absence of journalists, Abdul Khaliq Omran, Akram Al-Walidy, Tawfiq Al-Mansoori, and Harith Hamid.

Journalist Tarmoom stressed that the prisons of the Houthi militia are not like prisons, whose management is built by people who have imbibed a culture based on hatred and “belief that harming you, torturing you, and killing you is a victory and a farmer.” Rather, what is worse is that they see your profession as a danger that shakes the thrones of their masters and disturbs them.

Tarmoom added: This is the situation of our four colleagues who have no guilt except that they are journalists who were once doing their professional work, so the Houthi militia took them to prison and they have been in prison for more than six and a half years.

He said: Yesterday the father of the colleague Abdul-Khaleq Imran passed away, “There is no doubt that this calamity will be a great disaster for him and will add to him a new field of suffering, oppression, sadness and pain, wishing everyone to put himself in the place of the colleague Abdul-Khaleq Imran” after these years of suffering, torture, deprivation, anxiety and longing for his family. And his father in particular, who always remembered him a lot and always exhaled sighs of longing for him, receives this crushing news of the remaining spirits by which he overcomes the tightness of prison.

Tarmoum called on human rights defenders to work for the release of Abdel Khaleq and Akram ‘Harith and Tawfiq’.

Tarmoom said: Where are the world’s journalists to announce their voice and solidarity by releasing Abdel-Khaleq, Tawfiq and Harith, whose fathers died while in prison, their fathers left with wishes of meeting and hugs for their sons, stressing that the mothers of the kidnapped journalists lost their husbands while they have been waiting all these years for the joy of their children’s departure, and chant for the release of colleague Akram Al-Walidy to console His mother, whose osteoporosis, diabetes, and many diseases are almost killed by her, and enjoys meeting his father, who was exhausted by his son’s imprisonment and exhausted by diseases.

Hassan Annab, one of the journalists who was kidnapped by the Houthi militia and released in a prisoner exchange deal, wrote a letter to journalist Abdul-Khaleq Omran, condoling the death of his father, saying:

After greetings and appreciation

And how am I going to deliver the news to you?!

There you spend your seventh year among those dumb concrete walls, and those solid steel doors, surrounded by hardier hearts and darker souls.

However, I know with certainty that your determination and steadfastness are stronger and stronger than all of that.

You have always been for those around you among the free, comforting and stabilizing in the calamities and calamities that hardly leave those prisons.

No doubt your faith and composure will give your heart strength and patience, when the news reaches you.

It is true that it is a painful catastrophe .. but it is an inevitable fate in which there is no opinion or choice.

It is true that he is dear to you and to many… But he has reached his last stop, which requires him to leave.

He struggled and waited so long that he was tired and it was time for him to rest.

He only wanted to see you before her, but he couldn’t.. So I entrust you to God to take care of you with his eyes that never sleep.. He closed his eyes.

As long as he has children like Abdul Karim and Abdul Khaleq, and perhaps others as well, I don’t know them… he is still alive.

And if I knew that the Houthis had remnants of conscience, or a human predicament, I would be attached to it. I appeal to them and I appeal to every interested person to appeal to them to allow you to take a last look at him and bid him farewell, but you know very well that they only came to distribute aches, sorrows and corruption in the land.

More than praying for him, that is the only thing that the militias are unable to prevent from reaching.

I want to offer my condolences to my brother Abdul-Khaleq Imran, and I do not know what words can describe the extent of this calamity.

Your father left this world..yes, he went to the afterlife, and what you had been afraid of for six and a half years happened completely and perfectly. It is the period of your absence in the prisons of the worst militia in human history.

Your father, the seventy-year-old, has left, with his eyes searching for you in those attached to the cars coming from the market, and holding on to each movement of someone coming in the entrance to the house, thinking you are coming to bid him farewell. And the muffled cry hums in your chest from the corner of the prison.

May God grant you patience to help you overcome this calamity.

I see you the moment after you heard the news of your father’s death and you are in the corner of the cell, you sit cross-legged and try to control the sadness and tears with your two thin hands.

The journalist Ali Al-Faqih concluded his condolences to the journalist Imran, his search for patience and cohesion, and addressed the journalist, fellow jurist Imran, saying: God has chosen you for this calamity with your comrades because you are the most sincere, solid and sincere.

Journalist Abdel-Khaleq Omran was not the only journalist who was denied a last glimpse of his father. He was preceded by the kidnapped journalist Tawfiq Al-Mansoori, whose father died last June, defeated and oppressed, longing to see his son Tawfiq, who was kidnapped in the prisons of the Houthi militia five years ago.

The Houthi militia had issued a death sentence for four journalists, including the journalist “Tawfiq Al-Mansoori”, after false accusations were brought against them, the most prominent of which is treason and cooperation with the so-called aggression, they said.

On December 19, 2019, the mother of journalist Hassan Annab died when he was kidnapped by the Houthi militia, without being able to fulfill her dream of seeing her kidnapped son, who is free; After the militia refused to release him and his colleagues for the fifth year in a row.

And the mother of the journalist, “Anab”, died one day after he and his colleagues appeared before the so-called criminal court, which is run and supervised by the Houthi militia in Sana’a.

The Yemeni government stressed today, Sunday, the importance of controlling the work of ports, restoring the rule of law and ...

The US Navy announced on Tuesday that it had seized a large amount of weapons when they were smuggled through ...