Relief official: World food obstructs the disbursement of aid to beneficiaries in Marib

An official in the relief sector in Marib governorate accused the World Food Program of refusing to deliver the rations of relief beneficiaries, and reneging on its promises made during the meeting with the local authority in the governorate regarding the start of distribution today, Saturday.

The official explained to “Al-Masdar Online” that a meeting was held between the local authority in the governorate, represented by the governorate’s deputy responsible for the relief file, Abd Rabbo Moftah, and the World Food Program, represented by the deputy director of the program in the office of the temporary capital, Aden Muhammad Al-Sheikh, on Thursday, and approved the start of distributing food aid to beneficiaries starting today, Saturday. However, the program did not deliver on its promises.

He added that the program did not start distributing today, Saturday, as in the agreement, although “the relief materials for the current session have been in the program’s warehouses for more than three weeks, while the program is procrastinating in distributing them to the beneficiaries.”

The relief official warned that keeping foodstuffs in stores for this period and obstructing their disbursement to beneficiaries by partners exposes them to damage due to high temperatures, and raises questions about the objectives of delaying the exchange.

Food aid for the displaced in Marib has been cut off for three consecutive months. The program says that the reasons for this are the scarcity of support provided by countries to the aid program in Yemen. 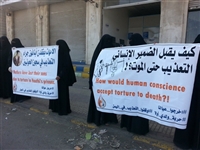 A citizen died as a result of brutal torture in the prisons of the Houthi coup militia in Sana’a. He ...

President Abd Rabbuh Mansour Hadi, President of the Republic, received today the US envoy to Yemen, Tim Lenderking, to discuss ...

The United States is taking advanced diplomatic efforts in resolving the Yemeni conflict, to push for peaceful steps and political ...