In a statement published by the Saudi Press Agency, SPA, the Kingdom said, “Based on the Kingdom of Saudi Arabia’s continuous endeavor to support peace and stability in Yemen, and to reach a comprehensive political solution between the Yemeni parties to achieve peace, development and prosperity for Yemen and its brotherly people, the Kingdom welcomes the issuance of Yemeni President Abd Rabbo Mansour Hadi in accordance with the constitution. The Yemeni initiative and the Gulf initiative and its executive mechanisms, announcing the establishment of the Presidential Leadership Council to complete the implementation of the tasks of the transitional period, and delegating it to the full powers of the President of the Republic in accordance with the constitution and the Gulf initiative and its executive mechanism.

The Kingdom affirmed its full support for the Presidential Command Council and its supporting entities to enable it to exercise its duties in implementing effective policies and initiatives that would achieve security and stability in the Republic of Yemen and end the Yemeni crisis.

And the Kingdom of Saudi Arabia announced that it had decided to provide urgent support to the Yemeni economy in the amount of (3) billion US dollars, as follows:

First: Providing $2 billion equally between the Kingdom of Saudi Arabia and the United Arab Emirates, in support of the Central Bank of Yemen.

The Kingdom also announced that it has provided $300 million to finance the humanitarian response plan announced by the United Nations for the year 2022 AD to alleviate the suffering of the Yemeni people and improve their living and service conditions.

The Kingdom called for holding an international conference to mobilize the necessary financial resources to support the Yemeni economy and the Central Bank of Yemen and to provide oil derivatives.

The Kingdom urged the Presidential Command Council to start negotiations with the Houthis, under the supervision of the United Nations, to reach a final and comprehensive political solution that includes a transitional period that will move Yemen to peace and development, and for the Yemeni people to enjoy security and stability. 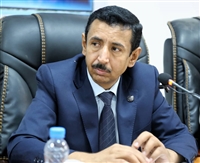 The Governor of Shabwah, Muhammad bin Adiou, announced that the Jannah oil sector would soon be operating, that Shabwa Governorate ...

The leader of the Islah party in Hadramout, Fuad Barboud, said that Islah is still making sacrifices for standing on ...

The assassination of the martyr Ehab Bawazir, director of the Department of Memorization of the Noble Qur’an in the Office ...