A workshop was held in the city of Marib on mechanisms to coordinate and unify efforts to advance Quranic work, with wide participation by associations and institutions related to the Holy Quran and its sciences.

The workshop, which was held under the auspices of the Minister of Endowments and Guidance Sheikh / Muhammad Aida Shabiba, and the Governor of Marib Governorate, Major General / Sultan bin Ali Al-Arada, aimed to come up with a unified vision for coordinating and refining the Qur’anic work.

The participants in the workshop recommended the necessity of immunizing society intellectually against the erosion of the Yemeni identity that the Houthi militia seeks, and working to preserve the homeland and its gains.

They also called for paying attention to the people of the Qur’an and establishing the sheikhdom of Iqra’ at the governorate level and proceeding from it to other governorates, taking care of the teachers of the Holy Qur’an and taking care of them financially and morally, and seeking to employ them through the Endowments and Guidance Office and the Memorization Department of the Education Office.

At the event, she presented a number of working papers, emphasizing in their entirety the need to pay attention to the institutions of the Noble Qur’an and take care of them, as they represent moderation and moderation in their outputs.

The event was attended by the Undersecretary of the Ministry of Endowments and Guidance for the memorization sector Sheikh Hassan Abdullah Al-Sheikh, the Director General of the Endowments and Guidance Office in the governorate, Mr. Hassan Al-Qubaisi, the Director of the Memorization Department in the Education Office, Mr. Mabrouk Jamala, and representatives of Quranic institutions and associations operating in the governorate. 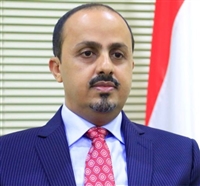 The Minister of Information, Culture and Tourism, Muammar Al-Eryani, said that the terrorist Houthi militia of Iran has evaded its ...

Interior Minister Major General Ibrahim Haidan said that “Iran and its military arms in our Arab region, including the Houthis ...

Muammar Al-Eryani, Minister of Information, Culture and Tourism, held the terrorist Houthi militia of Iran fully responsible for the safety ...