The Yemeni Congregation for Reform in Shabwa governorate sent a telegram of condolences to Mr. Muhammad Saleh bin Udayo, the former governor of the governorate, on the death of his brother Saeed.The Executive Office of Reform in the governorate expressed its sincere condolences to each of; Muhammad Saleh bin Udayo, Ahmed Saleh bin Udayo, and Sheikh Nasser Saeed bin Udayo and their brothers, in the martyrdom of Brother Saeed bin Salih bin Udayo.He stressed that the departure of Saeed bin Adiyo was a shock to everyone who knew him, as he was a man known for his goodness and striving to reconcile the same.He expressed his sharing with the family of Adyo their affliction, asking God Almighty to bless the deceased with the vastness of mercy and forgiveness and to protect the hearts of his sons, brothers and lovers with patience and solace.

Condolence text:With great sadness and sorrow, the Executive Office of the Yemeni Islah Congregation in Shabwa Governorate extends its sincere condolences to the dear brother, Professor / Muhammad Saleh bin Udayo, brother Ahmed Saleh bin Udayo, Sheikh Nasser Saeed bin Udayo and their brothers on the martyrdom of Brother Saeed bin Salih bin Udayo, asking God for mercy and forgiveness and for his family and the people of patience and solace.The departure of brother Saeed bin Saleh bin Udayo was a shock to all who knew him, as he was a man known for his goodness and striving to reconcile the sameAnd when we share their affliction with our brothers, the family of Adiyo, we ask God Almighty to bestow mercy and forgiveness on him and to protect the hearts of his sons, brothers and lovers with patience and solace, and to fix the situation and spare bloodshed, for He is Hearing and Responding.

Executive Office of the Yemeni Congregation for Reform – Shabwa

Unprecedented disappointment surrounds the Yemeni street, which cannot tolerate coexistence with the terrorist Houthi militia. After seven years of the ...

The spokesman for the blind army, Abdo Majali, said, “The recent military operations of the army were distinguished by their ... 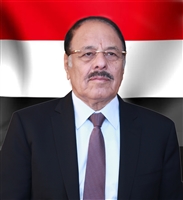 The Vice President of the Republic, Lieutenant General Ali Mohsen Saleh, made a phone call today to the Governor of ...