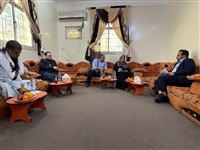 The Assistant Secretary of the Yemeni Congregation for Islah in Shabwa Governorate, Naji Al-Sami, received today, Wednesday, the head of the cross mission the Red Aden, Beatrice Ochley and her accompanying delegation, in the presence of a number of Islah leaders.During the meeting, Al-Sami welcomed the head of the Red Cross mission in Aden, Beatrice Ochley, and her accompanying delegation in Shabwa governorate.The meeting reviewed the humanitarian aspects in the Bayhan district and the organization’s interventions, as the leadership of fix To the hostile acts and crimes it was subjected to by the Houthi militia, before its liberation.She also touched on the Houthi militia planting thousands of mines in those districts of Shabwa, which were under the control of the militia, which caused the death of many civilians, especially women and children, noting what these constituted mine From a constant threat to the lives of civilians, calling on the competent authorities to expedite the removal of those mines.

The Islah leadership clarified the catastrophic effects of targeting civilians by the Houthi militia through the indiscriminate and continuous bombardment of ballistic missiles on residential cities in Bihan districts, noting that many families were unable to return as a result of the Houthis’ continued bombing of those areas.

In turn, the head of the cross mission crossed the Red The international leader in Aden, Beatrice Ochley, expressed her happiness at meeting the leaders of the political parties, led by the Yemeni Congregation for Reform, which is one of the most important parties Yemeni active and influential.attended the meeting the professor Salem Sael, Head of the Information and Culture Department, Ali Amer, Head of the Social Department, and Bahaa Al-Salami, Assistant Head of the Mission, on behalf of the organization.

The Secretary-General of the Council of Ministers, Muti’ Dammaj, launched today, in the temporary capital, Aden, the activities of the ...

Today, Monday, the Yemeni government called on the international community to identify the party obstructing the political solution in the ...