Top Stories Social Favors: The departure of Abdulaziz Zahra is a great loss for a national and social personality

Social Favors: The departure of Abdulaziz Zahra is a great loss for a national and social personality 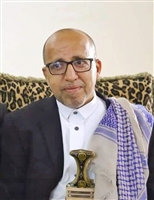 The news of his passing was shocking to the capital, Sana’a, and to the whole country. Professor Abdulaziz Zahra and who had not heard of him, the man who was known for his gentle morals and the services he offered to everyone without exception. Professor Abdulaziz Zahra passed away after a life full of giving and dedication to serving the community in the social, sports and other aspects. .

Minister of Industry Muhammad Hizam Al-Ashwal confirmed that the departure of Professor Abdulaziz Zahra represents a national loss for a social personality. To society in general and to his family, lovers and friends in particular.

Naef Al-Bakri, Minister of Youth and Sports, offered condolences to the Yemeni sports family in general, and Yarmouk Club in Sana’a in particular, on the death of the late, God willing, the former vice president of Yarmouk Club, and honorary president of the club Abdulaziz Zahra, who died yesterday in Sana’a, following a tragic accident.

Al-Bakri stressed that the deceased deserved a prominent position thanks to his success and distinction in leading the Yarmouk Club in Sana’a, and his contributions to the level of sports in Sana’a, and the country in general, in addition to his political and social successes.

Ali Al-Jaradi, Head of the Media Department of the Islah Party, confirmed that no one who knew Professor / Abdulaziz Zahra can remember him without his smile, which does not leave his face.

Ali Ashal, a member of the House of Representatives, confirmed that the rapid pace of death does not leave us an opportunity to reunite the wounds of our hearts after every calamity in which we lose a loved one or part with a friend.

He stressed that the news of the departure of the honorable Professor / Abdulaziz Zahra, his wife and son, was shocking and a great tragedy in a criminal accident caused by one of his sons.

Pointing out that Mr. Abdulaziz is a distinguished social and sports figure, and the former Capital Municipality deputy is an influential figure who had a distinguished presence in public work known for his tireless activity in the sports and service fields, social and charitable activity, and one of the noblest men I have known in morals, religion and dedication to serving people.

Dr. Sami Al-Sari confirmed that the deceased Abdulaziz was close to the young and the old, loved by everyone who knew him, as a servant to both near and far, and he was like a breeze who was kind to everyone who met him, with a cheerful face and a kind word.

Hussain Abdul-Qader Hilal confirmed that the news of the departure of Professor Abdul-Aziz Zahr is a great news and a great calamity for all of us, and it fell on the Zahra family, pointing out that Mr. However, he should raise his children on morals and religion, and everyone who knows and has heard about Al-Zahra realizes this.

Adding: I cannot imagine the extent of the calamity on the family of Professor Abdulaziz Zahra, and I have nothing but prayers for him and for those who died with mercy and forgiveness and to inspire his family patience and solace.

Journalist Adel Al-Ahmadi wrote a lengthy article about the departure of the national figure Abdulaziz Zahra under the title “Sana’a’s sky bids farewell to Venus.”

Al-Ahmadi affirmed that Professor Abdul Aziz, may God have mercy on him, was a noble, helpful and virtuous man, and a good, compassionate father.

Al-Ahmadi said: In 1997, I accompanied my father to perform a hernia operation at the Republican Hospital in Sana’a, and I saw a majestic man longing for his sick child with a warm heart. I asked his name, and I was told “Abdul Aziz Zahra” .. I knew nothing about him except that situation, then I found his picture years later As a candidate for the Islah party in the Qaa al-Ulfi district, it is there that I studied the four primary classes.

And then I learned that the man is the president of the Yarmouk Cultural and Sports Club, and that he is one of the most powerful republican tools in liberating the Sana’a neighborhoods from the thought of the dynastic myth, and that it was said that he is an authentic owner of a vision, a cause, a struggle and a balance in this aspect.

Al-Ahmadi added: The planet Venus did not want to leave the sky of Sanaa after the Houthis stormed the city in 2014. He is from the city of Sanaa, and he will not leave his city to the wolves.

The issue of rights and freedoms is one of the most important principles that the Yemeni Congregation for Reform has ...

A large crowd of civilians and military personnel, today, Saturday noon, the body of the martyr Brigadier General Muhammad Hussein ...

According to Yemeni reports, the Houthi militias incurred about 3,120 deaths during the first half of this year, while Sanaa ...