Top Stories Taiz.. A massive mass rally calling for the arrest of wanted men and support for the army to complete the liberation

Taiz.. A massive mass rally calling for the arrest of wanted men and support for the army to complete the liberation

Today, Saturday, a massive mass rally took place in the city of Taiz, in honor of the blood of the martyrs and an affirmation of continuing the path of liberation, consolidating security and facing the challenges faced by the governorate.

The march, organized by the Association of Martyrs’ Families, roamed the streets of the city, raising slogans expressing its loyalty to the blood of the martyrs and emphasizing the continuation of their path in confronting the tools and tails of colonialism, completing liberation and achieving security and stability for the city.

The statement of the march renewed the firm and permanent affirmation of full support for the legitimacy represented by President Abdo Rabbo Mansour Hadi, calling on the government to support the National Army with everything that would enable it to perform its duties, and not to stand by and watch the suffering and requirements of the National Army in Taiz.

He stressed the need to regularize the payment of army and security salaries, and support the security services to make them able to enhance stability and confront the malicious, unruly, and stalking gangs, calling on the Arab coalition to pay attention to Taiz Governorate, and support it with the necessary requirements that would break the siege and complete liberation.

The statement called on the army and security to combine their efforts to strike with an iron fist any gang or chaos that appears in its head in order to preserve social security and public tranquility, and we also call on all members of society to stand by the security services against these gangs.

He also called on the government to give the economic issue the utmost importance, as the living situation of the citizen has reached an unbearable stage, due to the high prices he faces, and the deterioration of the value of the riyal.

The statement called on the government to make every effort to restore all institutions and voluntary facilities that would supplement the budget with financial resources that would help alleviate the suffering of the citizens, praising the People’s Incubator in Taiz Governorate for its legendary steadfastness, its firm principled positions in the face of the Houthi priesthood militia, and its continuous support for the army. National, popular resistance.

The march statement called on all political and social forces to mobilize their political, media and material energies to confront the dynastic project backed by Iran, and to rise above any side polemics or fabricating fake battles.

He called on the local authority to assume its responsibility towards the national army and the security services to do its utmost to provide the requirements of the military and security establishment, especially in light of the interruption of salaries and the cessation of feeding.

The statement expressed its regret that the governorate remained without the presence of the first man at his workplace, which had a fatal negative impact on the workflow in the governorate, especially a governorate facing the Houthi priesthood militia, which we put in the hands of the President of the Republic, who has the power to put an end to this absence.

The statement stressed the move together in a comprehensive national alignment towards the completion of the liberation of the province, calling on all political and social forces and all components, to harness all energies towards this great goal. 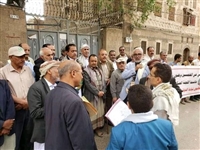 Homeowners and real estate owners resorted to demonstrating and defying the Iranian Houthi militia, which decided to expel them from ...

The United Nations announced the removal of all political, security and logistical obstacles to the process of starting the transfer ...

Today, Wednesday, colleague Hisham Tarmoum was transferred to a hospital in Marib, to receive treatment after his health deteriorated due ...