Top Stories Taiz.. A massive rally demanding the lifting of the Houthi siege and holding the UN envoy responsible for its continuation

Taiz.. A massive rally demanding the lifting of the Houthi siege and holding the UN envoy responsible for its continuation

Today, Wednesday, the city of Taiz witnessed a mass rally, to demand the lifting of the eight-year-old Houthi siege on the city, the opening of roads, an end to all manifestations of the siege, and allowing the movement of The movement of goods and various humanitarian needs without hindrance.

The statement issued by the march said, “The people of Taiz governorate affirm, through this majestic public mobilization, that opening roads and ending all manifestations of the siege on the governorate is a collective demand for all the people of Taiz, a local authority, parties, political components, civil society institutions, and citizens.”

He stressed that “breaking the siege on Taiz and opening the roads does not require committees or time, and there is no cost, and it is the real step that paves the way for comprehensive peace in Yemen. Unpostponed for all main roads, operation of water wells, electricity supply, access to the landfill and, before that, a moral and legal responsibility.

The statement added, “Despite the end of the truce, the suffering of the people of Taiz governorate, represented by the siege and the restriction of movement of the people of the governorate and the movement of goods and various humanitarian needs, is still ongoing and existing.. It holds the international community and the UN envoy responsible for ignoring the file of the siege of Taiz and the closure of its ports and main roads.” Which connects Taiz to various governorates, specifically the Taiz-Sana’a, Taiz-Hodeidah and Taiz-Aden roads.

The statement said that the humanitarian file is an integrated and indivisible package, while the people of Taiz governorate welcome the opening of Sanaa airport and the port of Hodeidah, they express their regret at depriving them of benefiting from them, warning that the truce ends, without opening the roads, which puts the international community in front of a real test regarding the Taiz road file. .

The statement of the march called for the speedy opening of all roads, and the lifting of the siege in its various manifestations on the people of the city, as they chose to choose long, arduous and costly roads financially and humanly… warning that the road file would be subject to division and installments.

He also stressed that the continued siege of the governorate led to depriving it of water and created environmental risks, most notably not allowing waste to be delivered to the garbage dump located in Houthi-controlled areas, stressing the neutralization of humanitarian areas of conflict and allowing water to be pumped from wells under Houthi control, and allowing aid to enter Humanity, food and medicine without restriction or condition.

He called for the criminalization of the use of drones, artillery and various types of weapons on the port of Mocha, which represents one of the main outlets for the entry of the most prominent humanitarian and commercial needs to the people of the province, stressing that there is no meaning for the armistice and for any negotiations that establish a comprehensive and lasting peace without opening all the roads and crossings of Taiz that secure the movement of citizens within its framework. And with other provinces.

The statement of the march held the international community and the envoy’s office responsible for any ignoring or neglecting the humanitarian situation in Taiz, which extends for seven years, which puts more than four million people in a tragic humanitarian situation, and also held them responsible for ignoring the file of the siege of Taiz and closing its ports and main roads linking Taiz with various governorates, specifically The roads of Taiz Sana’a, Taiz Hodeidah and Taiz Aden. 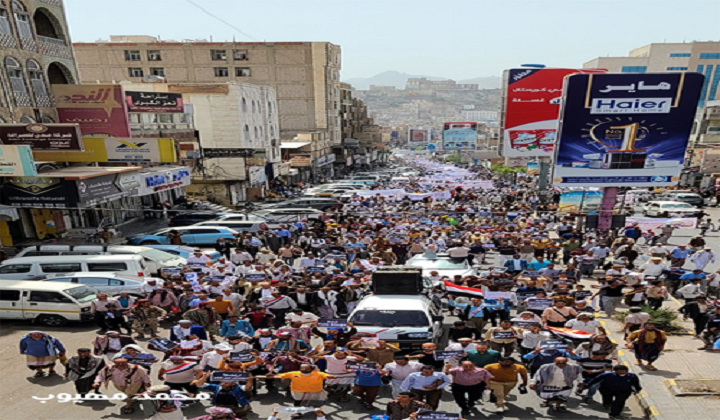 The statement stressed the importance of dealing with Taiz as a national artery for the economy, especially with the collapse of the global food and energy crisis that will cast a shadow over Yemen, which necessitates venting of commercial houses, national capital, industrial incubators and roads, stressing that the national capital and commercial houses in the governorate are the treasure of the whole country and that Any harm to it will harm the whole of Yemen and disrupt the economy, which is suffering from the effects of the war and the siege.

The statement affirmed their unlimited support for the Presidential Leadership Council headed by Dr. Rashad Muhammad Al-Alimi and for the outcomes of the Riyadh consultations, stressing that they will work to achieve the objectives of the consultations and move their outcomes into implementation.

The statement commended the Presidential Command Council for its concern for the wounded in the armed and security forces, and for directing the government to establish a comprehensive national body to handle the file of the wounded and to be subject to the direct supervision of the Presidency of the Government.

The statement expressed its appreciation for the unilateral initiative launched by Brigadier General Tariq Muhammad Abdullah Saleh, Vice Chairman of the Presidential Leadership Council, which opened roads unilaterally and without any conditions, and restored all bridges and ferries in Hodeidah. 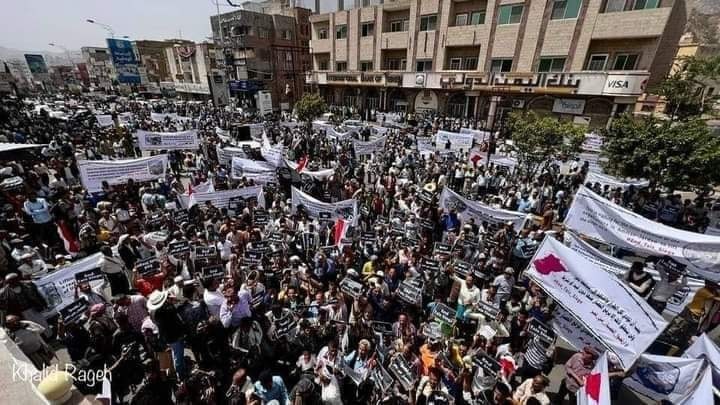 The tag is issued #HouthiTerrorismInYemen # Al Houthi_terrorist group is a trend list, where Yemeni activists and media workers launched ...

A state of anxiety and fear is prevailing in the street in Sana’a and its environs in the governorates due ...

The Minister of Information, Culture and Tourism, Muammar Al-Eryani, confirmed that the Iranian-backed Houthi militia continued to commit war crimes ...