The Chief of the General Staff, Commander of Joint Operations, Lieutenant General Saghir Hammoud bin Aziz, inspected today the progress of combat operations on the fronts of the Third Military Region.

Lieutenant General Bin Aziz, along with the Commander of the Third Military Region, Brigadier General Mansour Thawabeh, were briefed on the conditions of the fighters and the heroics and immortal sacrifices they had in the face of the Iranian-backed Houthi coup militia.

The Chief of Staff saluted the heroics and epics of the heroes of the National Army, the Popular Resistance and the tribesmen … stressing that the battle that the Yemenis are waging today represents the front front for all Arabs against Tehran’s expansionist ambitions in the region.

Lieutenant-General Bin Aziz, from the leaders of the fronts, listened to the human and material losses incurred by the priestly Houthi militia at the hands of the heroes of the army and the resistance … appreciating the support and attribution provided by the coalition to support legitimacy in the battle of Arabism and a common destiny.

The Chief of Staff emphasized the continuation of military operations on various battle fronts until Iran defeated every inch in Yemen and the Yemeni state restored the state of order, law and equal citizenship.

For his part, the Commander of the Third Military Region indicated the high morale enjoyed by the region’s affiliates and their readiness to thwart all the plans of the Iranian Houthi militia and to deal with its suicide attacks and turn them into hell on Iran and its tools.

Information Minister Muammar Al-Eryani warned of the catastrophic dangers of the practices of the Houthi militia supported by Iran on ... 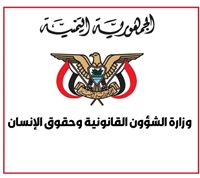 The Ministry of Legal Affairs and Human Rights condemned, in the strongest terms, the cowardly terrorist act carried out by ...

The Vice President of the Republic, Lieutenant-General Ali Mohsen Saleh, affirmed the legitimacy of the keenness to achieve the Riyadh ...